The Quick and Dirty with Claire on ‘This is The End’!!! 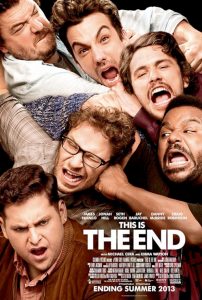 Synopsis: The apocalypse has come to Hollywood. The good have been taken to heaven during the rapture, and the bad (including most actors) have been left to fend for themselves against all sorts of invading evil. The story follows six actors (Seth Rogen, James Franco, Jonah Hill, Jay Baruchel, Danny McBride, and Craig Robinson) as they struggle to survive, find food and water, fight off monsters, and avoid killing each other in the process.

Pros: We have all seen movies where the strongest survive based on their training, strength, and survival skills. But here we get to see how soft, incompetent, weak, and self-possessed actors would respond to an apocalypse.  The star-studded cast revel in the opportunity to make fun of themselves, and somehow this on-going joke never gets old.  The movie is fast-paced throughout. The CGI monsters were pretty cool, reminding me of an updated throw-back to the 1980s ‘Clash of the Titans‘ special effects, and the villains are pure ‘Mad-Max‘ style. Rogen and Baruchel even managed to deliver the first rape joke that I actually thought was funny. But the best part of the film had to be Michael Cera. Genius. That’s all I can say.

Cons: The film appeals solely to the basest form of comedy, using puerile, gross-out humor rather than smart, witty humor.  If you have the cinematic taste of a 13-year-old boy, you’ll love all the humor. Otherwise, some of the scenes will likely make you cringe. Rogen and Baruchel push the R-rating to an almost NC-17 with a plethora of large dicks, peeing in one’s own mouth, and a 10-minute argument between Franco and McBride about where they plan to ejaculate (including on each other and around Franco’s house).  Unfortunately, the storyline was also pretty weak, relying more on forgettable fart jokes and the actors’ celebrity status, than great writing.  Oh, and the portrayal of Channing Tatum…was unforgivable. Ewwww.