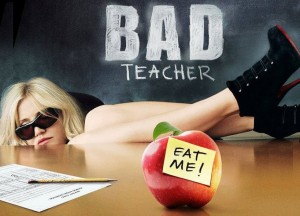 Columbia Pictures thinks ‘Bad Teacher‘ is the best thing since sliced bread. Not only are they developing a TV series based off the film, but they have just greenlit a sequel. Director Jake Kasdan will be returning as director and Cameron Diaz is currently dotting the i’s and crossing the t’s in her contract to reprise her role. It’s in her best interest to do the sequel as the first film (for some reason) made tons of money, despite it not being a good movie.

There is no word yet on if Jason Segel, Justin Timberlake, or Lucy Punch will be added to the cast again, but my bet is that they will in some form. The original rated ‘R’ comedy garnered $216 million dollars, which launched a CBS tv series the will star Ari Gaynor as the Bad Teacher. Now, I wasn’t too big a fan of the first film, but there were some good moments and Jason Segel was flat out hilarious. If he signs on again, then maybe the sequel will have some spark.

Just don’t see the need for a sequel to this one.  Your thoughts?