The Top 10 Soundtracks We Would Love To See Mondo Release This Year!!! 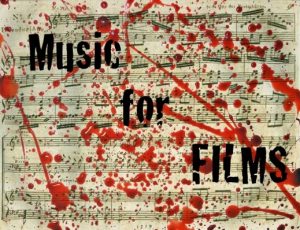 Mondo has only released a handful of soundtracks on vinyl since they first opened online, but this year they are hitting the ground full force with releasing more amazing movie soundtracks on the best quality format to listen to music. So far this year we have had ‘Poltergeist‘, ‘The Deadly Spawn‘, and the recent ‘Drive‘ soundtrack, which sold out in record time in under 30 minutes. And just this past week, they sold out of their newest soundtrack, ‘Oblivion‘, which has an amazing score. The cover artwork is amazing and the sound is even better with their releases. Mondo clearly knows what they’re doing when it comes to art and soundtracks.

I, myself am a huge conisseur of soundtracks and always look forward to the latest movie soundtracks that Mondo releases. There is a small community of us that genuinely enjoy listening to cinema music, and I see it growing larger each day.  Here is a TOP 10 list of movie soundtracks we here at Boomstick would love to see released in the near future through Mondo. If the good folks over at Mondo are listening, we look forward to much more movie soundtracks on vinyl with hopefully a few of these choices in your upcoming release book. 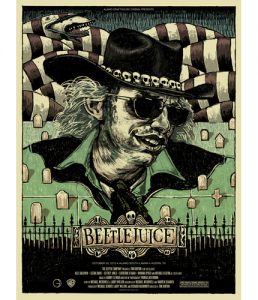 This album is amazing and is very difficult to come by. I’ve only seen promo copies of this before. The score by Danny Elfman sounds like a dark carnival/circus that was made for a headlining Las Vegas show. The strings and horns here are incredible and a bit haunting. Not to mention that there are a couple of tracks by the legendary Harry Belafonte, most notably the ‘Banana Boat Song’ (Day-Oh!), and ‘Jump in the Line’ (Shake Senora.)

Also a very difficult soundtrack to come across, but an AWESOME mix of songs to boot. This iconic 80s film filled our hearts and minds back in the day and still holds its own with most college films of the present. With songs like ‘Are You Ready For The Sex Girls’ by Gleaming Spires, ‘One Foot in Front of the Other’ by Bone Symphony, and the title song ‘Revenge of the Nerds’ by Rubinoos, this soundtrack is so much fun to listen to. It brings that nostalgia right back 100%. Also included on this amazing album is the talent show skit performed by the members of Lambda Lambda Lambda. Unfortunately, Michael Jackson’s ‘Thriller’ was no included on the soundtrack, but maybe Mondo will use one of their many connections to make a special release and add the song to the album.

Even though this has a short soundtrack list, Goblin’s musical score is eerie, haunting, and very good. I don’t even think this album has been released in the US before, thus I think Mondo could make a great LP release out of this truly terrifying horror movie. Just writing about this soundtrack makes me want to watch the film again and put in my CD copy of the soundtrack. I’ll admit that I still jump every time the dog jumps out and barks.

Stanley Kubrick’s ‘The Shining’ is one of the scariest films ever made, if not the #1 scariest piece of cinema. Much of that is due to the truly horrifying soundtrack it has. I’m sure most of you have seen a fan-made trailer for the film that was cut with a romantic-comedy type of score. This proves that the original music really intensified the horror full force. With arrangements by Wendy Carlos and Krzysztof Penderecki, the whole soundtrack sounds like you are being dragged into a deep dungeon, awaiting your grisly doom. This is also a rare soundtrack to find and is great to listen to. 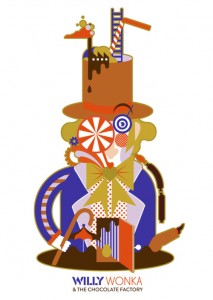 6) ‘Willy Wonka and The Chocolate Factory’

The original film and its music is iconic. Every time you hear ‘I’ve Got a Golden Ticket’ or ‘Pure Imagination’, I’m willing to bet you crack a smile and end up singing the rest of the song, no matter where you’re at. With lyrics and music by Leslie Bricusse and Anthony Newley, this one-of-a-kind soundtrack is just itching to be remastered and have an amazing modern day release. We would have all of the Oompa Loompa songs, Veruca’s ‘I Want It Now’ number, and the ‘Candyman’ song. Yes, we would have to sit through ‘Cheer Up, Charlie’, but we would get ‘The Wondrous Boat Ride’ track, which is so creepy, you’d think you were not listening to an album made for kids. 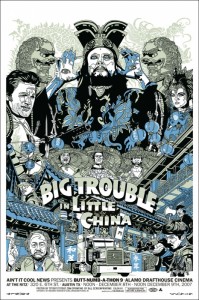 5) All of John Carpenter’s Films

Okay. Since this is only a TOP 10 list, I need to devote one spot to the list for all of John Carpenter’s films, because let’s face it, the guy can score a film. His scores are unique to say the least, but they have this strange and cool feeling to them, that leaves you wanting more. They even have a sense of nostalgia to them, that brings me back to the 70s and 80s. Included in this spot are ‘Big Trouble in Little China‘, ‘Halloween‘, ‘The Thing‘, ‘They Live‘, ‘Escape From New York‘, ‘Christine‘, ‘The Fog‘, and ‘Prince of Darkness‘.  I know, that’s a lot of records. Eight in fact, and while I know there are others, these are where Mondo should start. Now I know some of these have already been re-issued through another company, but let’s face it, Mondo does it best and the artwork would be killer. Plus I know we all want The Pork Chop Express on vinyl, and not to mention all of Carpenter’s original soundtracks are rare and very hard to come by. 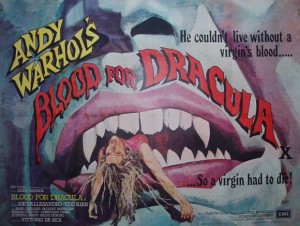 This is a super rare soundtrack on vinyl that is a beautiful yet haunting score by Italian composer Claudio Gizzi. Gizzi hasn’t done many scores, but he did this one and Warhol’s other horror film ‘Flesh For Frankenstein’. Not only that, Gizzi worked with Roman Polanksi as well on the movie ‘What’. ‘Blood for Dracula’ has a sensual score, but still has elements of creepiness. It’s as if you are in the renaissance days in Transylvania and are slowly becoming hypnotized by the bloodsucker himself. This might prove to your advantage when courting the opposite sex to seal the deal. Amazing score. 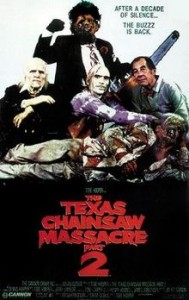 This album is amazing. It has songs from punk bands such as ‘The Cramps‘, ‘Oingo Boingo‘, and ‘Concrete Blonde‘. This is a true horror/comedy film from the 80s and became an instant iconic cult film. Original director Tobe Hooper took his sequel in a totally different direction from his original film which was pure terror. Part 1 and 2 of ‘Texas Chainsaw Massacre’ are a bit similar to Sam Raimi’s ‘Evil Dead’ 1 and 2 in that their sequels were more silly than horror. And let us not forget the infamous and classic image of ‘Texas Chainsaw Massacre 2’, which is the iconic pose from ‘The Breakfast Club’, but with the deranged and cannibalistic family. This soundtrack is the poster child for punk/heavy rock music in the 80s and still holds up to this day and would make an excellent edition to the Mondo catalogue. 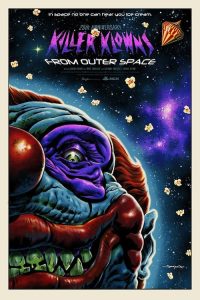 Not only do you have a chilling and creepy carnival score from John Massari, but you have original music by punk band ‘The Dickies‘. This horror film was a staple in my childhood as I watched it over and over on HBO, and then wore out my copy on DVD, and eventually blu-ray. The Chiodo Bros. did a flawless job in bringing back those schlocky 50’s era monster movies and made one hell of a fun horror film. I even had the pleasure to interview one of the Chiodo Bros. recently where they announced that they were making two more Killer Klown films. You can read more about that HERE. The score is amazing and the title song ‘Killer Klowns From Outer Space’ might just be one of the best horror movie songs ever made. The artwork on this album could be killer. 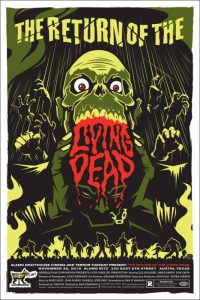 1) ‘Return of the Living Dead’

Yes. This it at the op of the list. It has everything you want from a soundtrack.  A great theme by SSQ, and one hell of a punk rock album including songs from The Cramps, TSOL, 45 Grave, and the famous Roky Erickson. This soundtrack is very very hard to come by and should be owned by any soundtrack or horror movie fan. The iconic movie blew all of our minds back in the 80s and I’m sure we all still think about Linnea Quigley from time to time with her naked dance in the graveyard. I’m thinking a variant vinyl of her naked on the vinyl itself. The artwork for the original poster is one of my favorite movie posters ever made, and I’m sure Mondo can find someone to run with it. This soundtrack is just begging to be released through Mondo and I hope it does in the future.

Honorable Mentions or Soundtracks that were not discussed, but still deserve to receive the Mondo treatment are as follows:

‘Fright Night’ with Music by Various Artists including Devo and J. Geils Band (1985)

‘Creepers’ aka ‘Phenomena’ with Music by Various Artists including Iron Maiden, Motorhead, and Goblin (1985)