Bryan Chats with Stephen Chiodo and Talks Everything ‘Killer Klowns From Outerspace’!!! 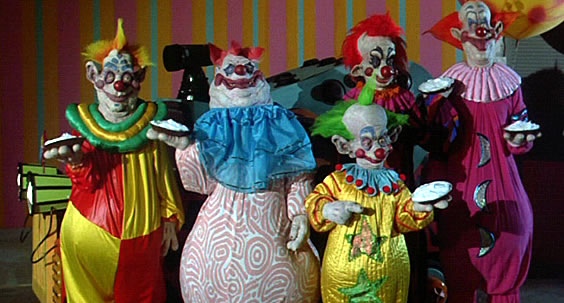 EXCLUSIVE: The first time I watched ‘Killer Klowns From Outer Space’, I was about nine years old and it was on HBO.  I watched it with my dad, and I remember how much we laughed and how frightened we were at certain moments.  Especially me.  I remember thinking how cool and scary those killer klowns were, and how much I wanted to go into that circus tent and shoot the popcorn guns.  It was one of the defining moments in my life where I know I wanted to be involved with film, especially horror.  I loved how there was very little CG, rather it was all real FX, costumes, and makeup.  After my first viewing, I looked in the paper to see if it was running anytime again during the week (back then, we had to read the paper to see what was airing on the one channel of HBO).

Luckily it was, so I gathered my friends over for a sleepover with junk food and we all watched ‘Killer Klowns From Outer Space’.  All of us were

in such awe of that film.  We all had a great time that night watching and talking about how great that film was.  It wasn’t until later on in life that I realized that the creators of ‘Killer Klowns From Outer Space’ worked on ‘Critters’, ‘Pee-Wee’s Big Adventure’, and ‘Land of the Lost’.  I’m of course talking about the Chiodo brothers.  Stephen, Charles and Edward make up the Chiodo brothers, and they have a studio in California where they are still making films, and is where they house and work on their movie monsters and characters such as the killer klowns.

“It was a space ship. And there was these things, these killer clowns, and they shot popcorn at us! We barely got away! “ 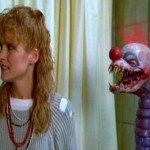 holds up today.  He went on to say that all the brothers shared a similar vision for the film and when they work together and that ‘Killer Klowns From Outer Space’ was a funny idea they had that morphed into an homage and throwback to old 50’s horror and sci-films.  They were involved in the stop motion industry in 1980’s California and were interested in making puppets and specialty characters for film.  At least for Stephen, watching an inanimate object come alive was one of his favorite things.

” Isn’t this place great or what? It looks like it was decorated by Klowns R Us. “

And yes, I asked about the props from the film.  At their studio, they house six of the original klown heads, the popcorn gun, and the cotton candy cocoon gun.  I was told that the popcorn gun actually can shoot popcorn by way of an air compressor.  What I would give to try that out.  Or even to put on one of those foam klown heads and walk around town.

Next year, ‘Killer Klowns From Outer Space’ will have its 25th anniversary.  I can’t believe it has been 25 years.  WOW.  Where does time go? 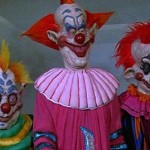 Finally, ‘Killer Klowns From Outer Space’ will be released on blu-ray for the first time on September 11th of this year.  Except for the new cover art, I think this is just a high def transfer from the old DVD version.  Sadly, no new extras.  Stephen said that the DVD print that came out a few years ago was the best print he has ever seen, but the studio didn’t contact him or his brothers to add any new extras for the bluray.  I can only hope for an ultimate edition of ‘Killer Klowns From Outer Space’ soon, complete with hours of bonus material.  One thing Stephen said that he wished was an extra on the DVD and the upcoming bluray was the music video to ‘Killer Klowns From Outer Space’ by The Dickies.  Unfortunately, Stephen is doubtful it will be on the new blu-ray.  They just don’t know for sure yet.

“Whatta ya gonna do? Knock my block off? “

We then discussed the highly anticipated sequel to ‘Killer Klowns From Outer Space’, which is currently titled according to imdb, ‘Return of the Killer Klowns From Outer Space in 3D’.  The brothers and original actor Grant Cramer have all been collaborating on the sequel.  There is a very creative script, the design work is in place, and the cast and crew are a go.  It was actually supposed to start shooting this year, however, things

have been delayed due to part finance and part distribution.  I can only hope all the deals can be made for this to go through.  Stephen said this will actually be a “re-quel”.  Part remake, part sequel.  It will be a new film, but will have elements that play back to the original movie.Not only that, they plan for two more sequels after this upcoming one, which Stephen described as a ‘Killer Klowns From Outer Space’ trilogy told in four parts.  They will also be staying with the traditional FX techniques with little use of CG or digital FX.  That is great news.  Other than that, Stephen couldn’t talk much more about the sequel.  He wants it to be a surprise.  I just hope it comes out soon.

Stephen said he just shot a pilot called ‘Earth vs. Everything, which is a 50’s style sci-fi/horror series that will feature fun and bizarre creatures and monsters.  Much like we have seen in those vintage 50’s films.  It’s not a parody, but just done in that retro style with puppets and stop motion FX. Bill Kopp, known for his work on ‘Eek! the Cat’, ‘Tom and Jerry’ , and ‘Dan Vs.’ teamed up with the Chiodo Bros to develop the project.  I’m very much looking forward to ‘Earth vs. Everything’ seeing the light of day.

We also talked about how Stephen thinks that the next big phase will be a retro sci-fi phase.  Instead of vampires and zombies everywhere, we will be seeing more vintage 50’s sci-fi monsters.  And I for one am all for that.  Secretly, I hope it will be killer klowns, but the vintage 50’s monsters and creatures will be better.

I asked Stephen which artists shaped his creative life and made him want to get into film.  He specifically mentioned Willis H. O’Brien and Ray Harryhausen.  He also went on to say that one of the films that made him get into the film business was the 1933 version of ‘King Kong’.  When he said that, I knew we had an instant connection.  My favorite film besides ‘Army of Darkness’ is the 1933 version of ‘King Kong’.  I even told him of my poster of the film sitting on my mantle above the fireplace.  Stephen lived in the Bronx growing up, and when he saw Kong rampaging through New York, it left an everlasting impression on him.  That might have been the seed that started Stephen on his career path into making fun and amazing film that has left an iconic and incredible mark on our culture and film.

Than you, Stephen for a great talk.