Todd Phillips Says ‘Hangover III’ Will Be Dark and Deathly!! 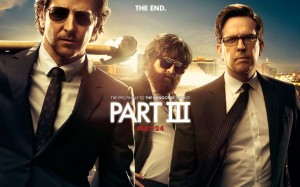 I, like many others, was super excited when word broke that they were coming out with ‘The Hangover Part II‘ and I was also very anxious to know if they were going to keep with the theme of the movie and do a wake-up and a blackout. That part didn’t bother me. Where I was a bit dumbfounded was the fact that Stu was marrying some Asian girl who had no relevance to the story line. After having seen the movie, I had hoped they would pick up where they left off to lead into Part II to have some sort of explanation as to who this girl is that Stu is marrying. Was he originally supposed to marry the Stripper (Heather Graham’s character)? And the Asian girl was her bridesmaide. Something along those lines.

I agree with the director Todd Phillips, that every joke is completely different. Who doesn’t love a movie with lots of one liners that you can quote. I am slightly optimistic about ‘The Hangover Part III‘. A death is almost expected in order to bring closure and finality. In my honest opinion, if Zach Galifianakis wasn’t chosen to play Alan’s character, I’m not 100% sure that I would even watch the movie. That’s my two cents and I’m stickin’ to it!

Phillips has confirmed that this third and final film will have the same set up as the first two and promised that things will get much darker than the previous films, stating, “People die in this movie. Nobody’s died in them before.”