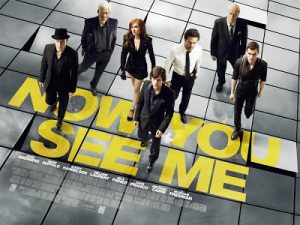 With a mix of ‘The Illusionist‘ and ‘The Prestige‘, and a healthy dose of ‘Ocean’s 11‘, director Louis Leterrier gives us ‘Now You See Me‘, which is a heist movie involving four magicians. The illusions in the film are over-the-top, but incredible and despite the movie’s flaws, its super fast pace makes its problems disappear from memory. With an all-star cast and decent dialogue, this magical caper might be one of the summer’s biggest surprises.

Getting things started quickly, we are individually introduced to our four magicians: J. Daniel Atlas (Jesse Eisenberg), a cocky sleight-of-hand magician who could put David Copperfield to shame, Henley Reeves (Isla Fisher), a beautiful magician with an emphasis as an escape artist to which we see her escaping glass box full of hungry piranhas in great fashion, Merritt McKinney (Woody Harrelson), who is a hilarious and quick witted hypnotist, and lastly Jack Wilder (Dave Franco), who is the equivalent of Matt Damon’s role in ‘Ocean’s 11‘ – a terrifyingly good pickpocket. 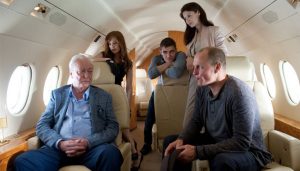 All four magicians are brought together by an unknown person to pull off some high-tech illusion in the near future, which we fast forward to their first heist, which is set in Las Vegas. Live on stage in Vegas and now dubbed the four horsemen, the team manage to rob a bank in Paris, France from their stage in Vegas, then making the arena rain with the newly acquired money over their audience. Meanwhile, Dylan Rhodes (Mark Ruffalo), an FBI agent is hell bent on taking down this band of magicians with the help of Interpol detective Alma Dray (Melanie Laurent), who seems to have a few secrets of her own. Add to that, Thaddeus Bradley (Morgan Freeman), a television personality who is famous for debunking magic tricks and Arthur Tressler (Michael Caine), who is the financier for the four horsemen.

These characters movie fast from state to state performing shows that draws hundreds of thousands of spectators, while several law agencies are tracking their every move and having Bradley trying to cash in on their mistakes and illusions. A car chase  and decent fight scene later, the climax ends in New York with a twist ending that would put M. Night Shyamalan to shame. I can’t wait to watch this movie again to see if there were any hints along the way. 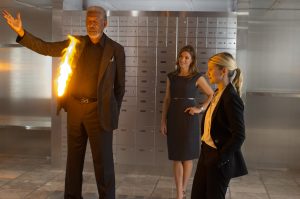 The illusions themselves are quite a spectacle and are so unbelievable that you have to watch this with a childlike sense of wonder and fascination, as like the audience in the film, you too will be putty in the four horsemen’s hands. This incredibly fast-paced movie really succeeds with the fun banter between the actors. It’s like a ‘Zombieland‘ reunion with Harrelson and Eisenberg, along with a ‘Dark Knight‘ homecoming for Freeman and Caine complete with witty insults and threats. It was a real treat.

‘Now You See Me‘ is one hell of a fun movie and definitely garners a second viewing. I don’t think this will win any awards, and sure there are a few issues here and there, but as fast as this movie moves, you won’t pay attention to the problems, as there is a bigger surprise up its sleeve.