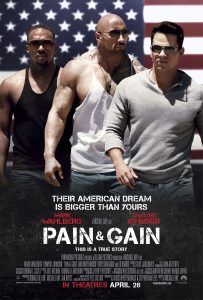 Michael Bay made a film for $25 million over the past year. This is a budget that he hasn’t had since  his first film ‘Bad Boys‘ in 1995. Between then and now, he has epic $100 million dollar budgets and is known for his horrible filmmaking and amazing explosions and car chases. The $25 million movie in question is called ‘Pain & Gain‘ and is a true story as it tells us on screen, which is very difficult to believe while watching what happens during its two hour run time.

The film takes place in the year 1994-1995, which I’d imagine is Bay’s favorite time period as we meet Daniel Lugo (Mark Wahlberg), who is an ex-con who got a job at a body building gym as a personal trainer. The one thing Lugo desires and constantly reminds us about is that he wants to the American Dream and thinks that he deserves to be rich and famous because he has muscles. Instantly, we see that Wahlberg has an odd charm about him, but it’s a hypnotic charm as he can easily be the worst scumbag on the planet. 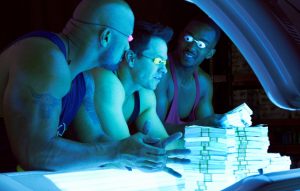 Lugo convinces his friend and work-out partner at the gym Adrian Doorbal (Anthony Mackie) that the both of them deserve better than being trainers in this world, and that they both indeed are worthy of riches. However, instead of going about it the right way, Lugo, who has a strange and powerful way in talking to his friends to get them to do what he wants, persuades Doorbal in a crime spree that when read on paper, seems to not be true, but after a bit of research on the case, every bit of it was true.

Lugo and Doorbal figure out that they need the help of one other person for their crime to be carried out where they run into Paul Doyle (Duane ‘The Rock’ Johnson) at the gym. Doyle is a former prison inmate, former coke-head, but now has turned sober and to Jesus. The Rock’s charisma follows him from picture to picture, and even though he is a bad guy here, you can’t help but like the guy. Unfortunately for Doyle, it was a case of picking the wrong gym in Miami to work out in as he was persuaded by Lugo to join their team.

Their brilliant idea was to become friends with one of Lugo’s clients at the gym, who was always talking about how rich he was. It was a plan to kidnap him and force him to sign all of his money and assets away to Lugo. The plan was only supposed to last a day or so, but as the kidnapped client wasn’t cooperating, the three bodybuilders resorted to torture and attempted murder for over a month. I say attempted murder, because they tried to kill him by blowing up his car with gasoline with him inside it and even running him over, but they guy still survived. And you can’t have just one taste of the criminal world, so the three decide to do the same thing again to another rich guy in Miami, and again, things don’t go as planned. However this time, the rich guy is with his wife and are brutally murdered amongst many other things that if I wrote them out, would be a rated ‘X’ article. 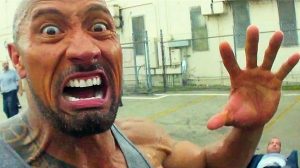 The fatal flaw in these three characters is that they are all very dumb people who can’t seem to think for themselves and will do whatever anyone tells them to do. There crime escapades play out like a slap stick version of ‘Goodfellas‘ as they can never seem to get anything right and are constantly fumbling around. The other flaw in the film is that virtually, no character is likable in the film. Even the victims by the three are not likable in any way. The only two decent characters in this painful movie have very little screen time and don’t add a lot to the story other than maybe a minor laugh or two.

It’s as if Michael Bay was tired of making kid’s movies for a while, and decided to put all of his yearning over the past few years to make a hardcore, brutal action movie again. However, this is really an action film, but more of a character piece on three low-life idiots. Some might find this movie fun. I found it tedious, annoying, and stupid. In doing a character piece, especially a narrative, I’d imagine you have to have at least one redeemable character in your movie. One that is on screen for more than 5 minutes. But instead we are forced to watch these three guys do horrible and sadistic acts to people, while they say “I only want the American Dream and to make the world a better place.” It just doesn’t make sense, as it didn’t with the real victim’s families who have spoken out against this movie.

I don’t think Bay wanted to offend anyone involved in the real case here, but more that he wanted to just show us the series of events through the killer’s eyes, who are on death row as you read this. Surprising enough for a Bay film, there is not one car chase, and only one tiny car explosion. But there are plenty of other moments that will leave you covering your eyes or looking the other way. And don’t fret, Bay’s signature camera swoops and pans are in there plenty of times as well as his quick editing style. I bet you can’t count to 6 before a camera cuts in any of his movies. It’s no different here. 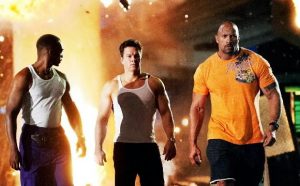 Wahlberg and Mackie do great jobs here as amped up roided out bodybuilders who are clueless in life. The Rock is the true star of the show here as he struggles with a life of crime and a life of good. He just lights up the screen every time he is on it. They are surrounded by a strange comedic cast with Rob Corddry, Rebel Wilson, and Ken Jeong.  And this might just be Tony Shaloub’s best performance as he plays Lugo’s first victim. Look out for Ed Harris here as well, as he turns in a short, but solid performance as well.

At one point during the film, you’ll see The Rock BBQ’ing something and you’ll think “This is completely insane, this didn’t happen.” That’s when the picture freezes and a title comes up on the screen and says “This is still a true story.” It’s that kind of movie that I think could have been better executed with a different director. Instead, we get a brutal and unlikable film that once it ends, we feel like we gained nothing and were caused a lot of pain.