Jeff Nichols has done a great job with his third film, ‘Mud‘, bringing us a coming-of-age story of two best friends in the south who bond with a homeless fugitive on the run. With amazing performances, a great script, and solid story structure, this tiny tale of love, confidence, and second chances might just win at the box office in due time with positive word-of-mouth.

The story centers around Ellis (Tye Sheridan), a 4 year old bot who lives with his unhappy parents (Sarah Paulson and Ray McKinnon) on a house boat in the deep south. His only friend is Neckbone (Jacob Lofland) a boy his age who lives in neighboring house boat with his free-spirited young uncle (Michael Shannon). The two boys tend to stick around the lake they live by rather than go into town where there is really nothing there. Ellis and Neckbone take a small boat out to fish and adventure where they come across a deserted island in the middle of the Mississippi River and find a dirty and gritty looking guy who calls himself Mud (Matthew McConaughey).

Mud has taken shelter in an old run down boat that is stuck high in a tree. Quickly, Mud tells the two boys that he killed a man in an altercation over Mud’s long lost love Juniper (Reese Witherspoon). Despite this knowledge, the two boys decide to help Mud by bringing him food and supplies everyday. In return, Mud will let the boys have the boat once he is reunited with Juniper who is staying in a motel in town and they are on their way out of town. In order to do this, Mud tells the boys that they must get him a motor for the boat, which the boys steal for him. Meanwhile, a gang of bounty hunters have arrived in this small town who are after Mud and Juniper as the leader of this bounty hunting squad’s son was killed by Mud.

There are some influences of old American literature, particularly of stories that took place in the South. One is ‘The Adventures of Huckleberry Finn‘, which Nichols has said heavily influenced him on this story. Another angle Nichols conveys here is that every relationship in the film has serious flaws and is strained. And our one constant is Ellis, who wants his parents to stay together and wants to help Mud, even if it means doing a criminal act, so that he can be with his lover. Nobody else seems to keep thing together.

Sheridan does an amazing job as Ellis. This is his second film, his first being Terrence Malick’s ‘Tree of Life‘, where he played the youngest brother. Although Ellis doesn’t talk much, his confidence, mannerisms, and eyes tell his story as he figures out important life lessons for himself. His confidence and courage attract older high-school girls and lead Ellis to stand up for himself and take on older guys in town and never backing down. All of the disappointment and anger that comes through the characters throughout the film lead up to a bloody climax that might be a tad bit cliche, but never oversteps the mark . 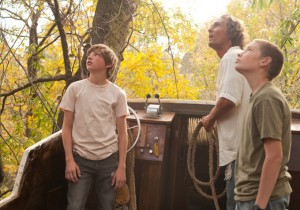 McConaughey gives a stellar performance as an outlaw who wants a second chance and just wants to be with the one he loves, even if she is holding back. His mystique, dirtiness, and even his chipped tooth all add to part of his charm, which might garner him an acting award in the future. Witherspoon does a great job here and is a step away from her romantic commercial films, as here she plays a tramp who is beaten and tossed around through her life and still can’t get it together. Shannon is barely in the film, but provides some comical moments as he tries to teach life lessons to his nephew and Ellis. There is a small cameo by Sam Shepard who has a few surprises up his sleeve and are never too sure about throughout the film.

‘Mud‘ is by far my favorite coming-of-age film of the last year or two. You’ll fall in love with the characters and most of you will relate somehow to one of them. My advice is to skip out a big blockbuster movie weekend and check this tale of second chances out. You’ll leave the theater satisfied, even if you feel a bit dirty afterwards.