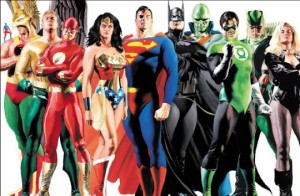 The good folks over at Latino Review have posted a bit of information that a lot of you will find exciting. It seems that Warner Bros., of course will be handling the ‘Justice League‘ film, but we have reported a few times on potential directors, producers, writers, and which superheroes would be in the first film. Needless to say, DC and Warner have been very tight lipped about anything ‘Justice League‘, as they are keeping the focus on their upcoming Superman film ‘Man of Steel‘, which we hear is the best movie of the year.

Well it seems now, that WB and DC is going to let Christopher Nolan, David Goyer, and Zack Snyder handle the ‘Justice League‘. The current plan we hear is that Snyder will direct from a story and script written by Nolan and Goyer.  Nothin is set in stone yet though.  And we also know that Henry Cavill’s Supes will be an integral part of the ‘Justice League’, however other characters and actors have not been named yet.

So if you think about that, when Nolan is involved, you can pretty much bet on it that Christian Bale will return as Batman once again, considering how much money he has made the studios. And we hear that this is a very big possibility. Plus, I imagine we will see at least Wonder Woman, Green Lantern, and Flash.  And I know at some point the villain was supposed to be Darkseid, but who knows who it will be now. With this bit of information and Nolan being pretty hands on with ‘Man of Steel‘, I hope that ‘Interstellar’ is still a go and not delayed.

Not too mention the story line of ‘World’s Finest‘ is in the cards as well. When Warner and DC confirm all of this, which I doubt will be anywhere in the near future, they are going to have possibly the biggest money making movie of all time. Yes, even more than ‘The Avengers’, sorry Joss.