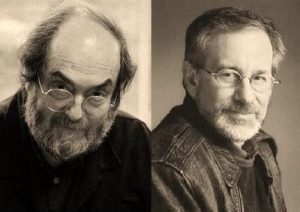 Spielberg is a very busy man these days.  Not only is he the jury president for the upcoming 2013 Cannes Film Festival, but he working on ‘Robopocalypse‘, ‘Jurassic Park IV‘, another war series with Tom Hanks, ‘Under the Dome‘, ‘When Worlds Collide‘, amongst several other big projects. Perhaps the most interesting is that he is not developing the dream project of the late Stanley Kubrick, which is ‘Napoleon‘.

Spielberg said, “I’ve been developing Stanley Kubrick’s screenplay — for a miniseries not for a motion picture — about the life of Napoleon. Kubrick wrote the script in 1961, a long time ago.” That’s all we know for now, but we do know Spielberg is working closely with the Kubrick estate on the project.

Spielberg took over Kubrick’s next project ‘A.I.‘ when Stanley died a few weeks after he finished ‘Eyes Wide Shut‘. The two directors were great friends and were constantly talking about ‘A.I.‘, on who would be better to direct versus produce the picture. And for us Kubrick fans all over the world, we all know how important this ‘Napoleon‘ project was to Kubrick as massive amounts of research was done for the project that never was.

There is even a large hardcover coffee table book you can purchase HERE, that details all the research of the movie. The movie studios back in the 60s didn’t want to fund the project for Kubrick, as the previous war films on ‘Napoleon‘ didn’t prove a big box office success. So, Kubrick went on to make ‘Barry Lyndon‘, perhaps his best shot movie and takes place 15 years before the Napoleonic wars.  Even after this, Stanley wanted to make his ‘Napoleon’ and even wrote a screenplay in 1969, which you can read HERE.

This is epic news. I hope Spielberg does right by Kubrick here.  Your thoughts?