Arnold Schwarzenegger Will Be Returning to ‘Muscle and Fitness’ Magazines As Editor!!! 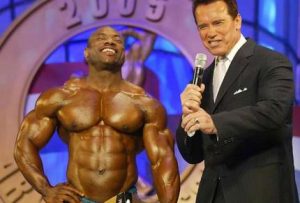 Arnold Schwarzenegger is returning to his first love, bodybuiliding, as an executive editor of Muscle & Fitness and Flex magazines. You will remember that he held this position before he became governor of California in 2003. The executive editor will have strategic and creative input along with helping out in monthly columns.

Schwarzenegger was made the face of bodybuilding in 1968 as a young 21 year old by Joe Weider, the magazines editor. He has been on the cover 60 times since given that title, along with being the youngest man to win Mr. Universe and a 7 time Mr. Olympia. Schwarzenegger has been quoted in saying that these magazines are what gave him the desire to start lifting weights, move to America, and realize his dreams. Schwarzenegger is due to reprise his role in ‘Twins‘ in an upcoming movie, called ‘Triplets‘, starring Danny Devito and Eddie Murphy. Plus he is wrapping up his promo tour to ‘The Last Stand‘.

I look forward to seeing him reprise his role as Julius from ‘Twins‘. Your thoughts?