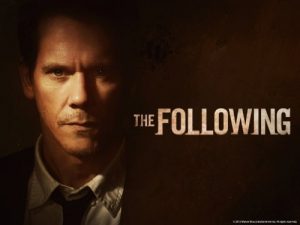 In this episode, “Love Hurts” the show opens with Ryan and Debra in a video conference briefing with 6 of the the Nation’s top government security agencies, and the meeting quickly turns to an inquisition as the investigation is not ending and more bloodshed is getting national attention. Debra and Ryan let the agencies in on what they know as an extensive following, or cult, for Joe Carroll, who is now a wanted fugitive, having escaped the prison on transfer.

Joe Carroll holds audience with the numerous followers in his compound to inspire them to “write” their own involvement in this conspiracy, as this show has now deviated from the direct references to the Poe, and gothic writing inspiration it once began referencing.  His newest protégé Amanda holds a very nervous court with Joe Carroll to explain her plot in his plans, flanked by two of the highest minions in the cult, Roderick (the sheriff) and Louise (the Blackwater operative). Amanda reveals her plot to include homage to Joe’s love for his wife Claire, who whereabouts are unknown as she is in protective custody. Amanda’s plans will include a “happy ending” which we can assume is the return of Joe’s wife to him. Flashbacks to Joe’s prison time where he met many of the cult members, we learn of how Amanda became involved in Joe’s life. Amanda kept a rich letter correspondence with Joe who upon the face to face meeting, seems to have become her confidant with therapeutic support thrown in for good mind control measures. Amanda’s first kills are inspired by Joe’s words to her in a letter to “insist on happiness” which she interprets to kill her husband and his mistress. Amanda murders become deep with psychotic tendancies as she unemotionally describes the cleanup process with pride then only show a bit of emotion at the concept that she may not have been thorough in her clean up or disposal and might get caught. Joe, as he does with many of his followers, offers her refuge through his friend, Roderick. 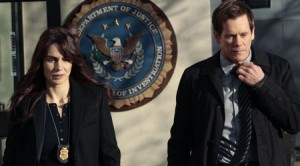 Jacob and Paul, have not made an appearance in the last few episodes, so the story picks up on where the two have been hiding and what their fate will be. Jacob and Paul have been hiding out in Jacob’s parent’s lake house, until Jacob’s mom comes to the home to find them there. Jacob’s mom comes to stay at the Lake House because her son’s photo and story (littered with accusations of kidnapping and murder) has been all over the news, and his parents have been harassed by the media and friends. The lake house is the only refuge his parents could find. Jacob cannot explain his involvement in the cult to his mother but does insist he has never killed anyone. Paul, who was stabbed by Ryan at the farm house, is in very poor health and is clearly suffering from his wound. Jacob’s mom just HAPPENS to be a nurse and tried to treat Paul. She discovers that Paul is septic from his wounds and tries to convince Jacob to take him to a hospital, he needs immediate medical care or he will die. Going to a hospital is just not an option for these two. Jacob’s mom pleads with Jacob to leave before his father comes to the house and sees them there, as he will surely turn them into the police. Flashbacks to an earlier time period explain the time when Emma is beginning a relationship with Jacob and Paul. Emma gives Paul his first killing assignment to prove his loyalty to the group, and sends Jacob with him to witness the act.  Paul and Jacob learn more of each other through the ordeal, as Paul realizes that Jacob has really never killed before, but swears the matter to secrecy between them. Paul also seals the secret with “You owe me”, foreshadowing a debt that Jacob must fulfill.

The dynamic between Emma and Roderick becomes stained as Roderick begins to suspect that Emma has ulterior personal motives for her relationship with Joe. Roderick checks Emma’s phone and discovers that Paul and Jacob are not dead as she let on, they had called and left numerous messages for her because she left them and she has yet to reach out to them to help. Roderick’s snooping seems to be punching holes in the fabric of Emma’s loyalty the greater good of the cult, and highlighting her selfish desires by agitating her about her indiscretions the night before with Joe, a still married man. Roderick reaches out to Jacob and Paul, sending an email to have them come join the others at the compound.

Jacob tries to rouse Paul to leave the lake house immediately, but Paul is obviously too sick, and knows he will only hold Jacob back. Paul cashes in his favor “you owe me” to Jacob by asking him without any words to end it. They say goodbyes and I love yous and share a tender moment (raising the question if the staged gay relationship they had in the beginning as part of the plot to kill Claire Matthews might have had some merit). Then Jacob fulfills his promise to Paul by smothering him with a pillow, and thus completing his first kill. It is questionable, however, the validity of Jacob’s kill as it seemed to be a mercy killing; less about the cult, and more about the survival of Jacob in that situation. The event was not completely devoid of emotion, which has been the theme of many of the cult’s terroristic ritual killings prior to now.

Amanda begins to act out her chapter in the “Book of Joe” by executing her first ritual murder in a diner with a full audience of witnesses. The chooses two friends who are meeting for lunch and kills one with a speargun underneath a table, while the other friend is disarmed from her suspicions that anything at all is even wrong, as Amanda reassures her that nothing is going on. Amanda sends a message to Ryan Hardy through the surviving friend that “sometimes love hurts” and it is revealed that the girl Amanda killed had a name that rings deep with Ryan, Claire Matthews. It is clear that the name was not a coincidence and word goes out to all law enforcement to track down anyone named Claire Matthews as they are in grave danger. Amanda’s chapter is to systematically kill every woman named Claire Matthews until the real Claire comes forward and can be returned to Joe Carroll. Later, another Claire Matthews is learning of this warning while she is on the phone in her apartment, when she has an unexpected knock at the door. Predictably she does not check the identity of the visitor who claims to be the police and simply opens her door to Amanda, who stabs Claire and throws her out of her high rise apartment window. Claire lands right next to a police car as the police exit the vehicle, no doubt to check on the welfare of this Claire. They are too late. Two more Claire Matthews in the area are located, one has been placed in protective custody, and the other is found to be a college student who HAPPENS to leave her dorm without her phone to attend a masked masquerade party on campus.

The FBI gather in droves, including Ryan, Debra, and the new head of the investigation, Riley, and spread out to find the endangered Claire Matthews. Claire is tipped off that the police are looking for her as a murderer may be trying to hurt her at that party. Like magic, Amanda and Louise appear and begin to stalk Claire. Claire runs to a police officer staked outside of the party for help, and the officer is immediately gunned down by Louise, who in turn, is immediately gunned down by Ryan hardy. Claire flees into and abandoned warehouse, conveniently decorated with the finest draped plastic sheeting and clamp lights for shadowbox effect on the cat and mouse chase that ensues between Amanda and Claire. Ryan is also chasing Amanda in an attempt to save Claire, when he is shot by a nail gun by Amanda. (who leaves a nail gun just laying around?) Amanda catches up with Claire and holds the nail gun to her head. Ryan engages Amanda and connects with her on an emotional level about this feelings for the real Claire Matthews. Amanda demands to know why he got involved with Claire, and he admits to falling in love with her, and still currently loves Claire. The honesty seems to disarm and confuse focus for Amanda for just long enough that Ryan can inch closer to her and disarm her from the nail gun. The FBI swarm in and take Amanda into federal custody, and the standoff ends with no harm done to Claire or Amanda. 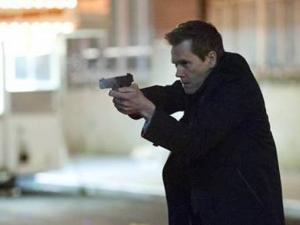 Roderick brings the bad news to Joe Carroll about Amanda and Louise, but tells Joe about learning the whereabouts of his estranged wife who is in protective custody, the real Claire Matthews. The news seems to make up for the loss of Joe’s two female protégés.

Roderick continues to terrorize Emma by interrupting what looks like her setup for another romantic interlude with Joe. Roderick brings Emma to the front door of the compound where Emma finds her former boyfriend who she left for dead looking her in the eyes, Jacob. The meeting is not pleasant as it is clear Jacob is not glad to see Emma, and Emma is upset that her lies to Joe about Jacob and Paul’s deaths will be known soon.

The episode ends with Debra telling Ryan that the investigation is being moved to Washington, and she feels like she is a failure. The knowledge that Ryan still loves the real Claire Matthews seems to complicate the matter of Ryan’s involvement in the case for the new head investigator Riley. We are left with an air of uncertainty of Debra and Ryan’s future involvement in this case.