Find Out What Misty Thought of Paul Rudd and Tina Fey in ‘Admission’!!! 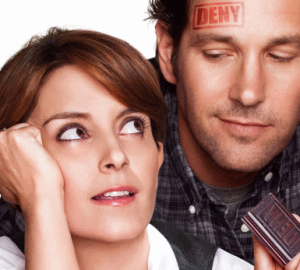 Over the years, we have seen Hollywood recycle the same old storyline for their romantic comedies, where we see an unlikely relationship between two people go through its ups and downs over the course of two hours. As a woman, I know how cliche and unrealistic this is, however I still enjoy the happy ending Hollywood usually provides when I leave the theater. I usually enjoy the warm, fuzzy feeling I get when I leave the theater.  ‘Admission‘ did not disappoint in that amorous feeling as Tina Fey and Paul Rudd did great jobs in the lead, lending plenty of jokes and heartfelt moments.

The flow of the film seemed natural and never forced and was necessary to give a good foundation to Fey’s character’s personality and quirks. Lilly Tomlin was perfect in the role of Susannah, Portia’s mother, with her spot on timing and witty comebacks at every turn.  I had an issue with Michael Sheen playing Mark in this comedy as Sheen is known for his more dramatic roles. He did a decent job, but I think a different comedic actor could have pulled off his character a little better.  Newcomer Nat Wolff was a breath of fresh air as he brought tons of charm and wit to the big screen.  You will be rooting for his chance of acceptance the entire flick. 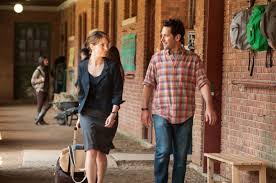 Fey plays Portia Nathan, a Princeton admissions officer whose life has become somewhat boring and predictable. Her live-in boyfriend Mark (Sheen) is seems to be as unsurprising as she is, but something feels off about him.  During Portia’s busy time of recruiting and working towards a possible promotion, she receives a phone call from an old college classmate John Pressman (Paul Rudd) about coming to his new-age school to recruit a senior genius Jeremiah Balakian (Wolff). When she gets there, John surprises her with the knowledge that Jeremiah is her long lost son that she gave up for adoption many years ago in college.  With this shocking news, she puts her job and life on the line to get the boy into Princeton.  As she goes through this process, her life slowly unravels and she begins to realize that her priorities she thought were important are no longer at the top of the list. In the end, everything that happened to her was for the best and she is able to move on and become the woman she always wanted to be.

The chemistry between Rudd and Fey in this romantic comedy is fairly decent.   The banter between the both of them is not over reaching and annoying, but rather natural and tender.  One of the more comedic scenes, is one where Portia is thrown out of her element in assisting a cow giving birth, which was very funny and well-acted. Fey has always been able to deliver a punch line with ease, all the way back to her being on SNL, and it shows her talent greatly in these scenes.  Rudd has been hilarious in films with an ensemble cast, but in this particular and more dramatic movie, he really showed just how funny and dramatic he can be without the help of others.  There are some scenes that will draw a tear or two between Portia and her mother Susannah (Tomlin). These scenes were the general foundation of Portia’s character and crucial to the development of the plot. 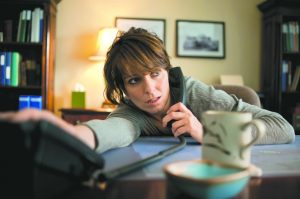 Besides the cow scene, the rest of the movie is full of well written jokes that are delivered well by both the rest of the cast. I generally enjoyed ‘Admission‘ and how it played out.  There are a few scenes that ran a little long, but those scenes are few and far between. The supporting actors in this movie were able to balance everything out and make the picture more enjoyable.  Both men and women will enjoy this, even though this it’s more or a romantic comedy than anything else. There are some scenes with some light sexual content, but nothing that a parent would have to worry about. I always base a movie on being good if I am willing to go see it a second time with someone and ‘Admission‘ is one of those movies that I would see again. I recommend this romantic comedy, as it seemed to differentiate from the norm.