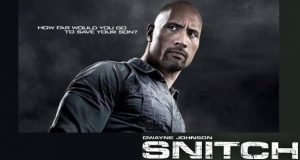 I was thoroughly impressed with Ric Roman Waugh’s ‘Snitch’, but for different reasons than you expect. Inspired by true events like most movies these days, this particular film produces a sense of true fear and hopelessness rather than show cheesy light-hearted inspiring stories that we tend to see in these “true event’ stories. And Dwayne ‘The Rock’ Johnson leaves his ‘The Rock‘ name at home and plays a real human being who is in over his head with some real bad guys. Not only that, Johnson proves that his acting ability is worthy of not a WWE Championship, but of an acting award.

Prior to the flick starting, I thought and actually discussed with a friend what I thought to get out of this film as the trailers portrayed it more as an action vehicle for ‘The Rock‘. What we all received instead was an amazing story and suspenseful drama about a father, John Matthews (Johnson) who is willing to do anything, and I mean anything to put a stop to his son Jason (Rafi Gavron) from serving a decade in federal prison under the mandatory-sentencing laws for first time drug offenders, which is a law that much of the population has a problem with. And what makes this incredibly tense and real is how Matthews goes about getting involved with vicious gangs and even a Mexican cartel.

‘Snitch‘ is taken from an actual news report that focuses on an actual law that procures a reduced sentence in prison for the convict for information leading to the arrest of other drug dealers and suppliers. Justin Haythe’s screenplay takes on the legality of this law and dives deep into the struggles of the characters and the tough decisions they make , rather than show a muscular guy who goes around offing bad guys, as we’ve seen so many times before. 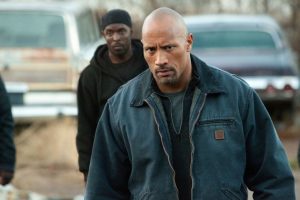 Matthew’s son, Jason, from a previous marriage is arrested by the DEA for, against his better judgement, accepting a package from the postal service full of Ecstasy for a friend as a favor. There is enough ecstasy in the package to make thousands and thousands of dollars. However, it was a setup and as soon as Jason opens the box to see what is in it, he is taken to prison and sentenced to ten years. Never doing anything like this before and not even having a speeding ticket, the DEA is trying to get him to rat out people he knows in return for a shorter prison sentence, but Jason really doesn’t know anyone in the drug game at all.

Matthews, who is a successful businessman who owns a big shipping and cement company, and has a new family now. And seeing no other option, he phones a few friends who have connections to U.S. Attorney Joanne Keeghan (Susan Sarandon), who seems to be willing to do anything to keep her political power. Keeghan slowly agrees to allow Matthews help catch drug dealers in return for his son getting out of prison.

Things don’t work so smoothly at first, but Matthews takes in one of his employees by the name of Daniel Cruz (Jon Bernthal), who is a two timer on drug distribution charges, but is on the straight and narrow now, getting his life turned around for his family, and pushes Daniel to introduce him to some of his former associates in the drug game. This leads to a meeting with big time criminal Malik (Michael Kenneth Williams), who after some suspenseful examinations, hires Matthews and Daniel to make a big drug run across state lines, using Matthew’s 18-wheelers. Low and behold, the first action sequence takes place after an hour into the film where our duo comes across a big Mexican Drug cartel led by Juan Carlos (Benjamin Bratt). In an undercover operation to take down Malik, Keeghan and under-cover DEA agent Cooper (Barry Pepper) decide to take down the cartel instead, which puts Matthews and Daniel into a much more dangerous situation now, as this is the only way he can free his son.

‘Snitch‘ caught me off guard for sure as I expected another run-of-the-mill action movie for ‘The Rock‘. However, Johnson never delivers a punch nor a kick in this movie as he is playing a regular average guy who is struggling not only the fact that his only son might spend the next ten years in jail, but that his divorce from his ex-wife and his absence from his son’s life has caused all of this. I’ve always seen Johnson’s charm and wit in every performance he has done, but with this, he shows great range into his dramatic ability as an actor. It was truly amazing and I think now, he can move onto the dramatic side of film.

The rest of the cast does a decent job, but feels underused in most places as they don’t have enough screen time.  That’s not the case with Michael Kenneth Willams though. Every time he is off screen, I found myself wanting him to be on screen more. He just brings so much life and character to each role he plays, and even though he’s bad guy in the movie, you root for him, just like we did in ‘The Wire‘ and ‘Boardwalk Empire‘. And with Waugh being a stunt coordinator, the climactic vehicle chase is done very well with some tense and great cinematic moments as well as his camerawork with the actors which ups their suspense and keeps us interested in the next scene. ‘Snitch‘ was not what I was expecting, but was far better than anything I could have hoped for. Don’t miss ‘Snitch‘.