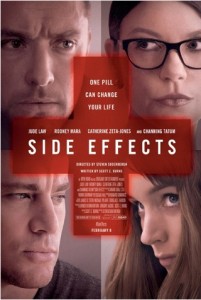 In what he claims to be his final film, director Steven Soderbergh delivers a solid, suspenseful story that still delivers amusing moments. Side Effects ponders our society’s dependence on psychiatric medications but binds the plot in a story of homicide, blackmail, and intrigue. If it is his last film, the storyline, acting, and film stand up against some of Soderbergh’s best. It wouldn’t be a bad one to end on.

The film opens with a quiet shot of a blood trail in an empty apartment. We don’t know what has happened here and the movie then moves back to three months prior. After four long years of waiting for her husband, Martin (Channing Tatum), to be released from prison for insider trading, Emily Taylor (Rooney Mara) begins to exhibit signs of deep depression. When she crashes her car into a wall at full speed, she meets Dr. Jonathan Banks (Jude Law) and though he is reluctant to release the seemingly suicidal Emily, she convinces him that she needs to go home to be supportive of her husband and promises to continue treatment.

To help counter Emily’s issues, Dr. Banks begins to prescribe various anti-depressant medications. The litany of names thrown out is long – some real, some created for the movie. And as they discuss which ones will work there is a constant reminder of the ads they appear in; Emily and other patients are well aware of all of the medications on the market and the supposed benefits of each. Emily tries several medications and none appear to work, pushing Dr. Banks to consult with a psychiatrist who once helped his patient, Dr. Victoria Siebert (Catherine Zeta-Jones). When Dr. Siebert suggests a new medication, Ablixa, Dr. Banks thinks this drug may help.

The Ablixa works. Emily and Martin seem to be doing better, she can focus on work again, she’s holding herself together, and in spite of an incident with sleepwalking, Emily and Dr. Banks agree to keep her on Ablixa. Martin has his doubts but ultimately his concerns are dismissed. When Martin comes home one day to a sleepwalking Emily preparing dinner, he tries to wake her and she proceeds to stab him and silently walk away and get in bed. We know what is going to happen when Emily has a knife in her hand and Martin tries to wake her, but this scene is chilling in its quietness. Emily robotically thrusts the knife into his body several times and then just walks away as he can barely get out words to try to wake her to help him. You gasp from the quietness more than any kind of surprise. 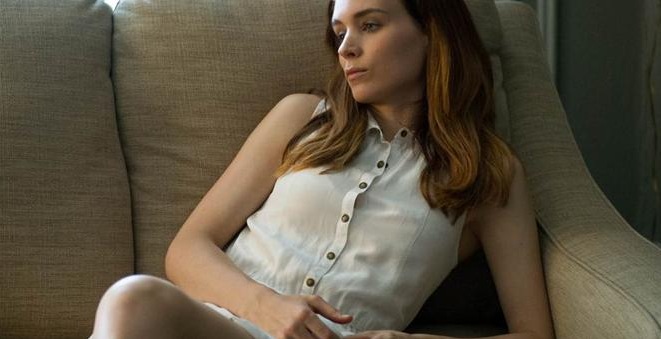 With Emily claiming to have been sleepwalking due to medication and her mental illness, Dr. Banks is called on to help her case. However, with pressures from others in his field and the questions of whether Emily should have been kept on the Ablixa, his practice begins to suffer. When she is found Not Guilty by Reason of Insanity, carted off to a state hospital and immediately starts to get better all while Dr. Siebert is found to be keeping in contact with her, Dr. Banks is certain that they have somehow conspired to bring this about. As he investigates his suspicions, he loses his practice, his family and in some ways his integrity – but ultimately, the truth and the reasons for their conspiracy vindicate the doctor for his paranoia.

Jude Law does a great job in this movie – even when you’re not certain whether he is just paranoid or if there really is something devious going on, you want things to turn out well for him. As he gets more and more obsessed with his investigation, you almost want to shake him and tell him to move on for his own sake. Channing Tatum’s role isn’t actually too involved, and he is sufficient playing the once arrogant trader. As Dr. Siebert, Catherine Zeta-Jones really delves deep into her cold-hearted bitch self. Rooney Mara’s work is fantastic – she flows from broken girl to calculating and vicious with ease.

The movie contains the signature Soderbergh look and even includes one of his usual montages to explain much of the story. None of this is groundbreaking, but it is still done well and is a reminder of why his films have been so successful. It is hard to imagine that he would walk away from his career having only recently turned 50. He claims that he’s run out of good ideas for film, but can that possibly last with someone as good as Soderbergh? He’s had an ability to bring us stylized, well conceived stories – some amusing and fun, some serious and provoking, and some that have a interesting mix of the two. Toward the end of Side Effects as Dr. Siebert and Emily’s collaboration begins to crumble, the audience smirks and laughs. It is delicious and enjoyable to see them pay for nearly destroying the life of an innocent and well-meaning psychiatrist, and even with the dark themes, we get a bit of a storybook ending that may seem too good, but you don’t care. I don’t know if Soderbergh will be able to keep away – I think this movie proves he’s still got some gas left in the engine and more likely needs a break.

Side Effects is something to see. It wraps the persistent questions of treating mental illness into a suspenseful story that does not keep you guessing about the innocence of the antagonists to the end, but does even better by locking the suspense in whether or not they’ll have to pay.