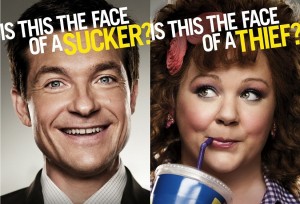 There hasn’t been a decent comedic road trip movie since Todd Phillips‘ 2000 comedy, ‘Road Trip‘. And with the recent ‘Guilt Trip‘ flick not performing well, I had some hope that ‘Identity Thief‘ would spark another engine in the comedy genre. Unfortunately, due to the scripted laughs, and unlikable main character, it falls it bit flat. I have no doubt though that the talented Melissa McCarthy and Jason Bateman will bring in big numbers at the box office, however the word will spread quickly that ‘Identity Thief’ is forgettable and ultimately unsatisfying.

Now I’ll be the first to admit that I love everything Melissa McCarthy is in from ‘Gilmore Girls’ to ‘Mike and Molly‘. And with her performance in ‘Bridesmaids‘, she rose to an uncharted level of stardom. She’s a lot of fun on screen and a comedic genius, however her small part in ‘Bridesmaids‘ had more laughs than her leading role in ‘Identity Thief‘. And by having a non-comedic supportive cast, it really lowered the level of comedy throughout.

The victim of this ‘Identity Thief‘ is good-guy Sandy Bigelow Patterson (Jason Bateman), who is a loving family man who works as a finance guy at a major company. When his fast talking boss (Jon Favreau) tells him to only send giant bonus checks to the executives, he joins several other employees to leave this current company and start their own, led by Daniel Casey (John Cho), who promises Sandy he’ll be vice-president and more than quadruple his salary. 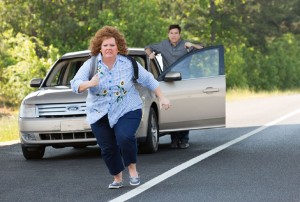 However, before you can say “new job”, Sandy’s credit cards stop working and is eventually arrested for credit card fraud. Quickly, the police and him realize that his identity has been stolen and all of these enormous tabs have been originating in Winter Park, Florida, whereas Sandy lives in Denver, Colorado. After the cop (Morris Chestnut) tells him that it could take a year to fix all the damage that has been done to his name and credit, and after his new boss Casey tells him he has a week to sort out this situation or else his job is gone, Sandy sets out to Florida to deal with this thief.

The thief in question has several names, but goes by Diana (Melissa McCarthy) most of the time. She has seemingly led a life of being alone and stealing others’ identities for many years as appliance in her house, she has more than four of and spends her days shopping for outrageous things and by night she runs up hefty charges at the local clubs and bars, and is not above fighting or puking on strangers. Once the Sandy arrives in Florida, he quickly and easily locates Diana, to which Diana acts violently. However, after a car crash and few hits to the throat, Diane decides to join Sandy back to Colorado to right the wrongs with his new boss so that he can keep his job, and as long as she doesn’t have to speak to the police.

In a weird and unnecessary plot twist, Sandy is not the only one after Diana, as a jailed gangster (Jonathan Banks) has hired two hitmen (T.I. Harris & Genesis Rodriguez) to take her out as well as a hell-bent bounty hunter (Robert Patrick) who will stop at nothing to bring her to his own form of justice. They both realize they can’t fly back as Diana has no real form of ID, they decide to drive back to Denver, and Sandy can only hope he can make it back within a week’s time.

The one fatal flaw with this film is McCarthy’s character, Diana. She comes across way too rude, offensive, and is very abrasive. Yes, she has a soft side, but we don’t see it hardly at all. Even when we do, it’s quickly taken away by her assaulting behavior. Diana is so unlikable in this film, that at times you wish that Otis Driftwood and Captain Spaulding would show up and teach her a permanent lesson.

But that’s not to say that McCarthy doesn’t do a good job. She does a phenomenal job as she was the best part of the film showing her emotional range and making us feel for her, even if it’s for a split second. Bateman plays the straight-laced guy to a tee, just like always, and is joined by an amazing supporting cast that is way under-used. There are a few laughs here and there, but nothing that’s gut-busting. ‘Identity Thief‘  might draw a strong crowd opening weekend, but that crowd will leave unfulfilled.