I didn’t know what quite to expect from ‘Killer Joe’, but after watching it, I got more than I bargained for.  ’Killer Joe’ was directed by William Friedkin who is most known for directing ‘The French Connection’, ‘The Exorcist’, and the recent film ‘Bug’.  Friedkin has been out of the spotlight for some time now, but his return with ‘Killer Joe’, the 76 year old Oscar winning director proves he has not missed a step.

‘Killer Joe’  was originally a stage play by Tracy Letts, which both Letts and Friedkin both collaborated on ‘Bug’, and was more comical than anything.  With ‘Killer Joe’, the comedy is much darker and adds a family size serving of ultra-violence and torture.  Make no mistake about it.  ’Killer Joe’ is rated NC-17, and it earns that rating from the very beginning.

‘Killer Joe’ is a southern noir film that combines comedy, terror, and red-necks perfectly.  Plus it takes place in Dallas, however all of the film was shot in New Orleans.  ’Killer Joe’ is actually Killer Joe Cooper (Matthew McConaughey), who is a police detective, but moonlights as a hitman-for hire.  The story centers around a red-neck family who live in a trailer park in rural Dallas that consists of Ansel Smith (Thomas Hayden Church), a mechanic, his waitress wife Sharla (Gina Gershon), his scumbag of a son Chris (Emile Hirsch), and his daughter from his previous marriage Dottie (Juno Temple).

The story starts with Chris coming to Ansel and Sharla’s trailer home to talk with Ansel about killing off his ex-wife to get her insurance money, because he has a sizable debt owed to  local gangsters.  This is where Chris hires ‘Killer Joe’ who has a fee of $25,000 up front for his services.  Chris is unable to pay ‘Killer Joe’ up front, so joe proposes that Chris supply a retainer fee in the form of Dottie, Chris’s sister.  The retainer would allow sexual access to Dottie at anytime, and when Dottie finds out about this, she seems to be perfectly fine with it.

As you may expect with any noir film, there are tons of complications that come up for all the characters involved.  Everyone is full of lies and betrayal with the exception of Dottie.  And it comes back to bite everyone in the ass.  The acting in this film is out of this world.  Gina Gershon deserves some kind of award for her role as Sharla.  She went through some rough filming for ‘Killer Joe’.  Church provides most of the comic relief in this film as he is a dim-witted guy who has a lot of good one-liners.  McConaughey is mostly known for his romantic comedy roles, but once in a blue moon he shines with a very dark and sinister role.  If you remember his role from ‘Frailty’, think that character, but amp that up to ten, and you have the sadistic ‘Killer Joe’.  Hirsch does a good job as well, but his role gets lost in the company of others.  And Temple is a fantastic actress.  I expect big things from her in the future.

There is a fine line with comedy and brutal violence which can be tricky for most people to accomplish, but with Friedkin and his cast of talent, they pull it off perfectly.  ’Killer Joe’ is a wonderfully crafted film from top to bottom.  There are some extremely rough patches to get through, but it ends with a powerful punch.  If you have the stomach for ‘Killer Joe’, I highly recommend it. 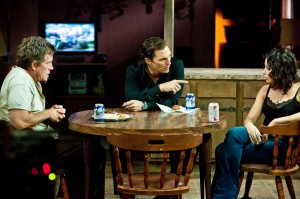 ‘Killer Joe’ comes with an impressive 1080p HD transfer and is presented in 1.85:1 aspect ratio. The colors are bright and shine throughout with the detail impeccably sharp and solid.  The facial hair on the characters are very detailed as you can make out each hair as well as the stitching in their clothes. The blacks run deep and inky with flawless shadows.  A couple of times, the image is softened, but nothing that is really noticeable.  This is a great video presentation.

This release has a very good lossless DTS-HD 5.1 audio mix and sounds pretty decent.  The dialogue is crystal clear and very easy to understand with their slow, thick southern accents. The ambient noise of general chatter and earth sounds come across nicely through the rears and surrounds.  And they are quite loud at certain times, especially when the thunderstorm passes and the motorcycles are in full motion. There is good directionality as well.  This is a solid audio presentation. 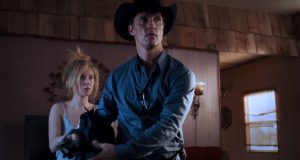 This film made my #4 spot for top films of 2012 and rightly so.  The story is great and the characters, while they are diabolical and mostly unlikable, were a lot of fun to which the actors did amazing jobs.  They deserve awards.  The audio and video presentations are top notch, while the extras didn’t truly impress me, it still had some good moments.  I highly recommend this film for the movie itself.  It’s amazing, even if at times it’s very rough and haunting.  You’re going to want to own this as you have never seen anything like it.