Tom Waits Coming To A Coffee Table Near You!!! 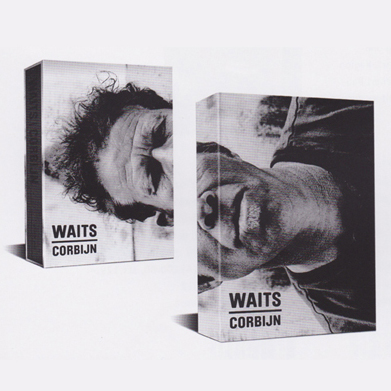 For you artsy-fartsy music fans who have always wanted musician Tom Waits‘ grizzled kisser gracing their coffee tables and/or book shelves, you are in luck, with a new collection of photographs by famed photographer Anton Corbijn, called “Waits/Corbijn ’77-’11”, releasing in May.

WAITS/CORBIJN ‘77-‘11, a collector’s edition linen slipcase book limited to 6,600 copies, is scheduled for a May 8th release in US and Europe by renowned German publisher Schirmer-Mosel. The coffee table art book not only features over 200 pages of Waits’ portraits taken by Corbijn over four decades, but also includes over 50 pages of the first published collection of musings and photographs taken by Waits himself. The linen bound book has  introductions written by film director Jim Jarmusch, and the longtime music critic Robert Christgau.

WAITS/CORBIJN ‘77-’11 is the chronicle of an artistic collaboration that reaches back more than 35 years, to those first black-and-white photographs of Tom Waits taken by a young Anton Corbijn in Holland in 1977. Corbijn would go on to acclaim for his iconic enigmatic portraits of musicians and other artists—from U2 and Miles Davis to Robert De Niro and Clint Eastwood to Damien Hirst and Gerhard Richter—also becoming a designer, a pioneer in music video and more recently, an award-winning director of feature films. By 1977, Tom Waits was already known world-wide for a series of stunning, timeless albums, filled with songs of a noir-tinged Los Angeles that owed as much to writers like John Fante and Jack Kerouac as it did to jazz, blues and tin-pan alley that had soaked into Waits’ pores from childhood. Ahead of Waits lay his partnership with Kathleen Brennan—leading to such touchstone recordings as Rain Dogs and Mule Variations—his film work with the likes of Francis Ford Coppola and Jim Jarmusch, and his stage projects with legendary director Robert Wilson.

In those first photographs, then, are the seeds of these two intertwined careers, feeding off each other. Waits’ vibrant persona helped Corbijn define his narrative, cinematic style of still photography: images that felt as if you were coming in on the middle of some unfolding drama. Corbijn complimented Waits’ theatrical side in a way that synced beautifully with the experimental music he was making with Brennan.  “Anton picks up a small black box, points it at you and all the leaves fall from the trees. The shadows now are long and scary, the house looks completely abandoned and I look like a handsome… undertaker. I love working with Anton, he’s someone with a real point of view. Believe me, I won’t go jumping off rocks wearing only a Dracula cape for just anyone,” Waits says.
Waits’ own photography, collected here for the first time under the title “Curiosities,” gives a visual handle to the artistic intelligence millions of fans know only through his music.

Photographs of Tom Waits by Anton Corbijn, photographs by Tom Waits of the vivid quotidian, stretching down through the years and presented for the first time in a beautiful clothbound book; side by side, these 226 images record one of the longest and most fruitful collaborations in the careers of both artists. “It’s rare”, Corbijn says, “to take photographs of someone over a 30+ year period. Our work together developed totally organically and that’s a beauty in itself. We are very serious about our work but when it comes to working together, we’re like children resisting maturity. It’s liberating and a much needed legal drug.”

Waits/Corbijn ’77-‘11 is now available for pre-order, which will set you back about $200, at www.tomwaitsstore.com.