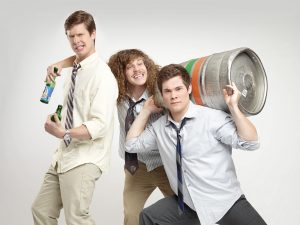 Good news everyone.  Comedy Central is standing by their hilarious and very popular comedy series, ‘Workaholics‘, because  the network just announced that it will be running new episodes for two more seasons at least.  This past summer, the third season of ‘Workaholics‘ was averaging over 2 million viewers per episode, making it one of the network’s top shows.

Comedy Central head of programming Kent Alterman said, “When I realized ‘Workaholics‘ is not a reality show, it made me appreciate the guys’ talent that much more.  It only seems right that we would renew for two seasons.”  The stars and creators of the series Blake Anderson, Anders Holm, Kyle Newacheck, and Adam Devine said they are “stoked” about the renewal.  I can’t wait for the next season, which starts January 16th.  Congrats to everyone involved with the show.