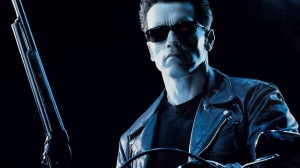 As Arnold Schwarzenegger is touring the world for his press junkets for his latest film ‘The Last Stand‘, it was bound for someone to ask about a future ‘Terminator‘ film.  Well, in London, the good folks from Bleeding Cool have reported that Schwarzenegger has confirmed that he will indeed star in the next ‘Terminator‘ film, for which you counting at home will be number five.

This being said, this has not been confirmed by the studio yet, however Arnold has confirmed it.  I’m willing to bet, the studio was planning on releasing the info much later, but Arnold spilled the beans a little early. And we still do not know what type of role he will play, considering he is much older now, but I imagine he will reprise his T-800 robot character with a bit of CG to make him look younger again.

And if you remember, Schwarzenegger was very unhappy with ‘Terminator: Salvation‘ because, if you saw, you know why.  It was pretty awful.  And about a year ago, director Justin Lin was attached to direct ‘Terminator 5‘, but left the project to make more ‘Fast and Furious‘ films, which makes me laugh.  So now, they have writers Laeta Kalogridis (Shutter Island) and Patrick Lussier (Drive Angry) writing the script, and we hope in the next few months, we will hear more on this project.

Until then, Arnold has a few projects in the works, including ‘Triplets‘, the sequel to ‘Twins’, which will reunite Arnold and Danny Devito and will add Eddie Murphy.