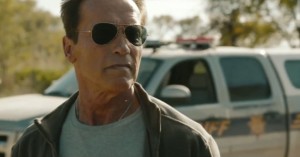 Like most of us, I grew up watching Arnold Schwarzenegger films, which I loved them all.  I would see every new Schwarzenegger film with my dad the day it came out.  It was like a tradition.  From the ‘Terminator‘ films to ‘Predator‘, ‘Twins‘, and all the way up to ‘The 6th Day‘. Enjoying for the most part, all of the films in their own unique way. Needless to say, Arnold has been in my life since I was little, if were on the television, the big screen, or in the form of action figures and comics, his characters have always been there.

Well I had the distinct pleasure to talk with him for a very small amount of time, due to his busy schedule.  That’s right. It was one on one between me and the Terminator.  I had so many questions prepared to ask him, but I asked him only one, before he was taken away to sign autographs for the masses and to take his next flight to the next city.  Being a complete lover of all aspects of film, and being a fan of pretty much every genre of film, I always like knowing people’s opinions about movies and the people who make movies. I especially like reading about directors, writers, and actors opinons on films they grew up with , which led me to ask Arnold, “What are some of your favorite films?”  His answer stunned me as he smiled and listed off his favorite films as well as some of his influences.

Arnold Schwarzenegger: Great to meet you too.

BK: Love the film. You were great in it.  I’m curious, what are some of your favorite films…non-Arnold films?

AS: Ummm… ‘Gone With The Wind’, ‘E.T.’, umm, all of the ‘Rambo’ movies, Clint  Eastwood’s movies, especially ‘Dirty Harry’, and of course the John Wayne movies that inspired me as a kid to get into movies in the first place.

And that was it unfortunately, but WOW. What an answer.  Freakin’ ‘E.T.’ is one of the Terminator’s favorite films. I would have never have guessed that.  And when he said all of the ‘Rambo’ films, I immediately had a HUGE smile on my face and wanted to get Stallone on the line to tell him about it. Although it was an uber short interview, I was glad to talk with the legend.  The video of the interview is below. Enjoy.