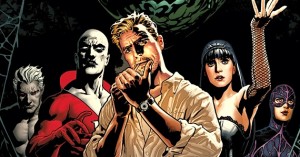 I think Guillermo Del Toro might just be the coolest guy on the planet, next to Tom Waits.  His new epic film ‘Pacific Rim’ is testing through the roof, we hear and Warner Bros. is so happy about it, they want Guillermo to make all their films.  Warner offered Guillermo to direct a feature adaptation of the tv series ‘V’ and a sequel to ‘Charlie and the Chocolate Factory’.  But we hear that Guillermo wants to do his own version of a film like ‘The Avengers’ or ‘The Justice League’.

The film he wants to do will be called ‘Heaven Sent’ and get a load of this…..he is going to take all the supernatural and magical heros from the DC Comics archive and make a film with them in the vein of ‘The Avengers’.  This sounds like it might just be the coolest film ever to play on a screen.

Deadman, The Spectre, Swamp Thing, Constantine Hellblazer, Phantom Stranger, Zatanna, Zatara, Sargon, and Etrigan the Demon will team up together and fight some ungodly monster villain according to Latino Review.  Now , I don’t see this project getting underway for at least five years, but I do know that Warner is working around the clock to gain the rights to all of these characters.

Holy god, I just can’t imagine how badass this movie could be.  I really hope everything falls into place for this film, because this could be bigger than any film out there.  Now, we just need a Marvel Zombies movie in the works.  And I wonder if Keanu Reeves would reprise his role as Constantine.   I hope so.