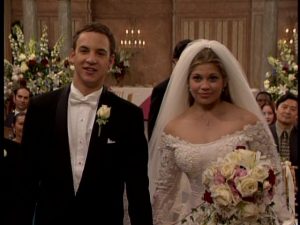 I can’t believe it’s been more than ten years since the last episode of ‘Boy Meets World has a new episode.  Since it’s solid seven season run on ABC, the Disney Channel is gearing up a sequel series for the show and has even made the deal with Michael Jacobs, the co-creator and executive producer of ‘Boy Meets World’.

The project is currently titled ‘Girl Meets World’ and centers on the pre-teen daughter of Cory (Ben Savage) and Topanga (Danielle Fishel), who if you remember actually married on series over a decade ago.  The show will be from the point of view of their daughter.  And according to TVLine, Disney is trying to get Savage and Fishel to reprise their roles on the show.

This seems to be the next big thing now in Hollywood.  The powers that be are rebooting a bunch of series, more so with the kids from the original characters.  Don’t believe me?  Well, look at TNT’s new ‘Dallas’ series or the new CBS series ‘Beverly Hills Cop’, which features Axel Foley’s son.

I’d like to see Fishel and Savage get on this, since we haven’t seen them do much in a while.  And will Mr. Feeny come back as well, or his offspring to teach?