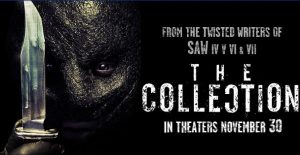 Looking for the perfect holiday movie to enjoy with the kids? Yeah, this is not it. The Collection is the story of a demented serial killer, The Collector, who truly enjoys killing and torturing in the most gruesome ways possible. If you are a fan of gore porns like the Saw series, you’ll want to check this out, but it’s not a truly scary movie.

The set up of the plot is quick and told through a series of news clips about a city in terror as a serial killer continues to kill dozens of people with no apparent pattern, making him more difficult to be tracked by the police. Enter Elena (Emma Fitzpatrick) – a young woman who is the only person left in her father’s world and is protected by him and the guards hired to watch over her. After sneaking out to go clubbing with friends (don’t get too attached to the friends), Elena is caught in a warehouse that is actually The Collector’s death trap. Though Elena survives the various booby traps that take her friends, she is taken by the killer, but one other person survives and escapes.

Arkin (Josh Stewart) was previously held by The Collector, and escapes as Elena is abducted. In the hospital, he is approached by one of Elena’s protectors and induced to help find the killer. Luckily Arkin came up with a system to track his former prison and they quickly arrive at a large and abandoned hotel. Arkin is now forced to help trek through the hotel looking for Elena, who unlike many women in these types of films, is actually not helpless. She escapes her box, avoids traps, and powers through surreal rooms filled disgusting, dismembered victims and prisoners who are still alive. 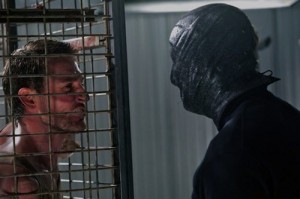 One-by-one the team of protectors are picked off and blood drips, spruts, runs and pools. They run into victims that the killer has kept alive and who protect him – they are either drugged to insanity and have become human guard dogs, or they are people suffering the most disturbing version of Stockholm Syndrome I’ve seen. Arkin, who we discover is a career criminal, proves to be hard to kill and very able to take on the various schemes and traps throughout the old hotel. In the end, it is Arkin and Elena together, who take The Collector out, and Elena, the one who was to be saved, actually ends up saving Arkin.

The reason this movie is not scary is that there is nothing truly haunting about it. We don’t find out enough about the killer’s background or the reasons he has decided to treat humans worse than the bugs and animals he collects and preserves. There are moments of apprehension as we watch people die horrible deaths, but it really disappears once the scene is over. As a person susceptible to really scary movies, I can say I had no problems with the shadows on the wall in my apartment afterwards  and was able to soundly sleep.

As mentioned above, Elena was refreshing in her perseverance. As Arkin, Stewart does a decent job, but otherwise the rest of the acting is just good enough to hold up the 5-10 minutes of plot we get before body parts start flying. Ultimately, if you like Saw, you should definitely put The Collection on your list of movies to see in the theater. I think you’ll want to experience the gore on the big screen. If you’re looking for something that haunts you like The Ring, this movie won’t hit the mark.

Purchase the 1st film below.

One thought on “Film Review: ‘The Collection’”