Check Out The Amazing New Trailer for ‘Dead Island: Riptide’!!! 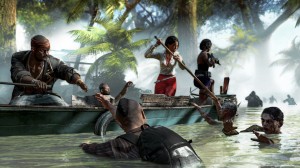 Remember that awesome trailer for the zombie video game ‘Dead Island’?  This will refresh your memory.  Well the good and talented folks over at Deep Silver and TechLand have a new game in the same universe.  It’s called ‘Riptide’ and looks just a s good as the first game.  From the website, “They thought they had escaped the terrors of Banoi and survived the apocalypse on a corrupted paradise. Then their fate took a turn for the worse… The Dead Island heroes escaped in a helicopter to the safety of a military ship, but when a furious storm hits and the virus suddenly spreads throughout the crew, the nightmare starts all over again, leaving hope drowning in the rising tides.”

The game will be released sometime next year.  I really enjoyed playing the first game.  It was creepy as hell and a lot of fun of driving into those rabid zombies, killing them.  Enjoy the trailer below.  Someone must have been cutting onions near me, because I might have teared up.