Ben Affleck and Matt Damon Team Up for ‘Race to the South Pole’!!! 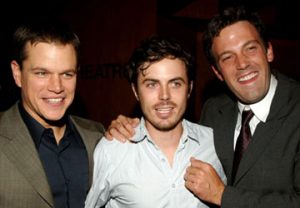 Warner Bros. is developing a film called ‘Race to the South Pole’, which is a true story of two people in the early 1900s who want to be the first person to reach the South Pole, the last uncharted place on the globe.  The two guys in question are Robert Falcon Scott and Roald Amundsen, who are from different countries.  They were seen as heroes of their time and it gained national attention to see who would make to the SouthPole first. And Ben Affleck and Matt Damon are producing the film with Casey Affleck, Ben’s brother attached star.

You can read about these two explorers and see who made it first.  But this sounds like a good story to tell and maybe Ben and Matt will cameo in the film as well.  I’m not sure if they have a director yet, but I’m willing to bet Gus Van Zant’s name is being thrown around, and maybe even Affleck himself.