Bryan’s Review of ‘The Bourne Legacy’!!!

Let me start off by saying that I love the first three “Bourne” films.  I have owned them multiple times and on multiple formats, the latest one being the out-of -print bluray set.  Those three previous films were sort of milestones in filmmaking that took us on different continents and developed a new faster paced action film, that was brutal yet beautiful.  This new film, ‘The Bourne Legacy’, sadly does not have any of that.  I found ‘The Bourne Legacy’ slow-moving, weak, and un-interesting.

‘The Bourne Legacy’ furthers the advancement of the whole Bourne universe, but shouldn’t even be considered a part of the original three films.  This is not a reboot, but rather a 4th installment of the spy-on-the-run thriller made famous by Matt Damon.  Tony Gilroy took over the directorial job from Paul Greengrass and Doug Liman, and while the film as a whole looked the same, and there were some familiar faces, the excitement, action, and characters were unfulfilling.  Gilroy directed ‘Michael Clayton’ and wrote the other Bourne films.  Knowing that, I can’t believe, he missed the mark this much with something so familiar to him.

The film centers around a field agent by the name of Aaron Cross (Jeremy Renner) who is an off the grid spy for the USA, and is on a severe training mission in Alaska.  While on this training mission, we see that he can be just as badass as Jason Bourne was by seeing Cross fight rabid wolves with his bare hands, shoot a drone out from the sky with a sniper rifle, and jump from mountain top to mountain top.  Cross shoots the drone out from the sky, because this drone was targeting to kill him by CIA manager Eric Byer (Edward Norton), because Byer learns that this whole “spy” program has become compromised or “infected” by he arrival of Jason Bourne in New York. So to cover his ass, his mission is to kill all agents like Jason Bourne, which there are nine of, Cross being one of them. 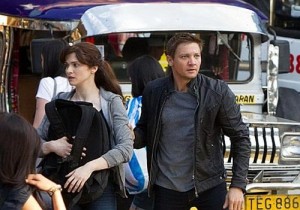 The rest of the film has us following Cross who desperately needs “chems” or medication for his programmed mind to keep him sane.  He has run out, and this secret medication is only supplied by the government and is made in the Philippines.  Byer thinking Cross is dead from the drone attack allows him to focus on killing the other agents.  This leaves Cross to stealthily move across the USA to find Dr. Marta Shearing (Rachel Weisz), a genetic scientist who worked on Cross and the other agents developing these drugs to make them almost super human.  Cross and Shearing pair up and head to the factory in the Philippines to get the medication.  Byer soon realizes Cross and Shearing are alive and helping each other out, and he unleashes assassins to hunt them down.

It sounds like a great movie, but sadly there really isn’t anything there.  The action sequences in the first three Bourne films were top notch and very thrilling.  I was on the edge of my seat through every action scene, but with this new film,there were only two major action sequences with a couple of sub par fight scenes.  The 25 minute car/motorcycle chase scene, was just a chase scene.  There were barely any car crashes if at all, not a whole lot gun fire, and nothing really at stake, besides both vehicles traveling fast.  It was all a huge let down, and I didn’t want it to be.

Yes, they did set it up for a sequel, but I don’t see how any of it will be relevant.  I’d sit this film out and watch the originals instead.