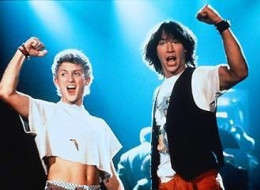 We have been talking about a third film for ‘Bill and Ted’ for what seems like a year now.  We have heard from both Keanu and Alex about how they want to do a third film and how they are working on a story for it.  Well, it seems all the work has paid off as there will be a third film.  Both Alex Winter and Keanu Reeves are attached to star with Dean Parisot to direct.  Parisot was responsible for ‘Galaxy Quest’.

Ed Solomon and Chris Matheson (the original creators of Bill and Ted) are also involved.  Solomon and Matheson wrote this new script on spec so that we can get a quality film and learn where Ted Theodore Logan and Bill S. Preston Esq are in their current lives.  This was supposedly rejected by other studios, because the studios wanted a reboot or remake.  According to Vulture, the project is aimed to be mid-priced in the vein of ‘Hot-Tub Time Machine’.

MGM Pictures still owns the rights to the ‘Bill and Ted’, but the producers are shopping it around to other film companies in hopes to co-finance.  This third film is still a way off, as Parisot has to finish directing the sequel to ‘Red’, but after that, it is all ‘Bill and Ted’.  Not a lot is known as story plot or other casting, but we will fill you in on all updates.

We here at Boomstick are very excited about this and can’t wait for more updates and the film itself.  In the meantime, “Be Excellent to each other, and Party on Dudes”.