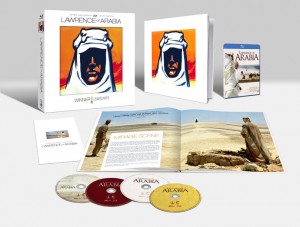 Sony has announced the 50th Anniversary of ‘Lawrence of Arabia’ on Bluray.  And by the looks of it, this bluray is going to be the ULTIMATE edition.  This will release November 13th, 2012. The film was nominated for ten Academy Awards and won seven: Best Original Score (Maurice Jarre), Best Film Editing (Anne V. Coates), Best Sound (John Cox), Best Cinematography (Frederick A. Young), Best Art Direction (John Box, John Stoll, and Dario Simoni), Best Director (David Lean) and Best Picture.

“We wanted to return this film to as pristine a condition as possible to honor its anniversary release,” says Grover Crisp, EVP of Asset Management, Film Restoration and Digital Mastering for SPE. The original camera negative was scanned at 8K and the film went through a painstaking process of repairing problems inherent to the 50-year old film elements. Using the latest digital imaging technology, the color grading and re-mastering was completed in 4K at Colorworks, Sony Pictures Entertainments’ digital intermediate facility. “The original negative was seriously damaged in a number of ways, some problems dating from the original release and some accumulated over the years.” says Crisp. “But, until now, we did not have the tools available to address these issues. We think fans of the film will be as amazed as we are at the detail and resolution in the imagery captured by cinematographer Freddie Young to compliment David Lean’s immaculate direction.”

So far, extras and specs have yet to be announced, but I expect that to change shortly.