HBO and Stephen Merchant Team Up For ‘Hello Ladies’!!! 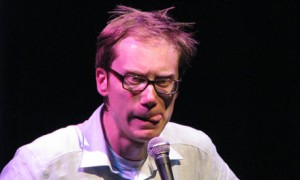 HBO has picked up a pilot of ‘Hello Ladies’, a comedy series co-written, directed, and starring Stephen Merchant.  ‘Hello Ladies’ was also written by former ‘Office’ writer/producers Lee Eisenberg and Gene Stupnitsky.  Merchant was star as a gawky Englishman searching for the woman of his dreams in Los Angeles. Half as charming as he thinks he is — and twice as desperate — he’s obsessed with infiltrating the glamorous world of beautiful people. Unfortunately the beautiful people won’t let him in.

Merchant did a stand up tour last year called ‘Hello Ladies’ and touched on some of the themes that will be in the series for HBO.  Let’s also note that Eisenberg and Stupnitsky both wrote ‘Bad Teacher’ starring Cameron Diaz last year.

I’m a big fan of anything Merchant does.  He is comedy gold, and I’m sure this will be hilarious and get its series order soon.  I’m still waiting to hear if his pal Ricky Gervais will produce and co-star.