I was excited to see ‘The Watch’ when I sat in my theater chair.  I’m a fan of Ben Stiller, Vince Vaughn, Jonah Hill, and Richard Ayoade.  And I thought the premise of the film was going to be a lot of fun as well, mixing a vulgar humor guy comedy film with a full scale alien invasion.  It sounds good on paper with that plot and cast.  Unfortunately, Hill, Stiller, and Vaughn play the same character they have played in their last seven movies.  The script is lethargic throughout the entire film with the exception of a few lines of dialogue that I suspect was improv.  And that feels weird to say since the script was credited to Seth Rogen, Evan Goldberg, and Jared Stern.  While ‘The Watch’ has a decent premise and stellar cast, the mark is missed by a good 1000 yards.

‘The Watch’, formally called ‘Neighborhood Watch’ (because of the Trayvon Martin case), takes place in a small, friendly town in Ohio.  There are large cookie cutter homes, friendly neighbors, and well manicured lawns.  This is where we meet Evan Troutwig (Stiller) who is a straight-laced married man who has worked for Costco for more than a decade, placing him as the senior manager of the store, and instead of spending time with his beautiful wife Abby (Rosemarie DeWitt), he forms several clubs in the community and is in charge of everyone of them.  He is like an older Max Fisher from ‘Rushmore’.

When his night security guard comes to work the night shift at Costco, you see that Troutwig genuinely cares about all of his employees and even congratulates the security guard on his new American citizenship.  But soon after Troutwig leaves the store, the security guard is brutally killed by an offscreen monster.  This prompts Troutwig to form another club after the police are no help in finding the killer.  The recruits are Bob (Vince Vaughn), who is his ‘Old School’ character amped up to 10.  Then there is Franklin (Jonah Hill), who is a much creepier version of his character in ’21 Jump Street’.  And finally there is Jamarcus (Richard Ayoade), who is a recently divorced British man who loves sex. 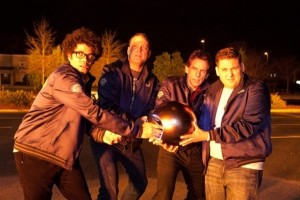 As Troutwig tries keep his new club on a serious note, the other guys just want to hang out with the guys, drink beer, play pool, and lounge around.  That is until, they all actually see an alien.  From here on out, the members of ‘The Watch’ track clues to find an alien hive, avoid a rude cop (Will Forte) who is tormenting ‘The Watch’ at every turn, and keep the neighborhood peaceful and safe.  Add in a few montage sequences of the Watch finding an alien weapon and blowing things up, as well as finding an unconscious alien and taking pictures and posing with the alien in some raunchy positions.  It all leads to the climax of the film inside the Costco.

While I found it fun to watch Vaughn play Vaughn, the other characters were tiresome and dull with the exception of a few lines of dialogue from Jonah Hill.  But even then, it was the same humor and improv I have seen in the rest of his films.  However, the aliens themselves were my favorite part of the film.  They looked amazing.  These were some of the best aliens I have seen in a long time. They were scary, articulate, and did not look fake whatsoever.  The FX team and puppeteers did a great job.

‘The Watch’ has a lot of good things going for it, but ultimately fails almost everywhere.  Instead of the film staying on point, it was more concerned with montage sequences of the guys partying and drinking beer.  I’m sure some of you will laugh a bit in this film, but for me, it’s the same schtick I’ve seen from these actors over the past few years.  This could have been better.  But I didn’t expect much from director Akiva Schaffer, since his last feature film was ‘Hot Rod’. Keep an eye out for cameos from Billy Crudup and Andy Samberg.