‘Battle Royale’ Might Be Reborn as Series For CW!!! 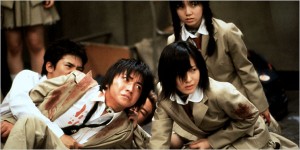 First off.  Fuck everything about this.  I hope it doesn’t get made.  These people at CW would ruin this story faster than you can say Noriko.  I can’t believe this would even be up for discussion.  A film and story like ‘Battle Royale’ should not be made for network television.  Hell, it shouldn’t even be remade.  It’s a perfect film as it is.  And if these assholes decide to remake it, give the money and talent it deserves.  Not some hack at CW.

Over the last few weeks, the CW has been in talks with some people in Hollywood about turning this film into am English language tv series.  It’s in the very early stages of getting things rolling, but if this project gains momentum, they want an hourlong series according to the LATimes.  A lawyer representing the rights to the story (which was a graphic novel by Koushun Takami) said, “…there is no deal in place.”  Well, I can rest easy for now.

At least, one of the major points to making a deal is that Takami himself has to approve any remake before anything happens.  I just hope Takami knows how fucking dumb the CW is for this type of project.  Back a few years ago, producer Neal Mortiz wanted to produce a remake for the big screen of ‘Battle Royale.  Thank god that didn’t happen.  I don’t think any of us want the guy who produced the Fast and Furious films to have his greedy hands on ‘Battle Royale’.

The CW already has a similar project they are prepping called ‘The Selection’ about a group of young adults battling to the death in a dystopian future.  CW, if you read this, leave this story and film the fuck alone.  It doesn’t need you.  And if it wanted to be remade, it certainly shouldn’t be by you.  Let Tarantino and Gareth Edwards work on it.  Or hell, let Christopher Nolan have at it.

I’ll update you all as information comes available, but I sure hope this doesn’t happen.