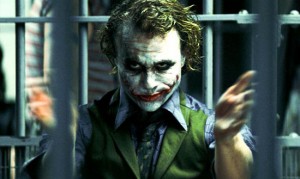 Since most of have seen ‘The Dark Knight Rises’, a lot of us were wondering why there was not one mention of The Joker in the third film.  Christopher Nolan definitely let it be known that he was not including The Joker in the film.  He didn’t even mention him in a line of dialogue.  I wish there would have been some sort of mention, but sadly there wasn’t.

However, the ‘Dark Knight Rises’ has a novelization of the film and in the novel, there is small section that references the fate of The Joker, which is pretty cool.  MTV got their hands on the book and revealed the following image. 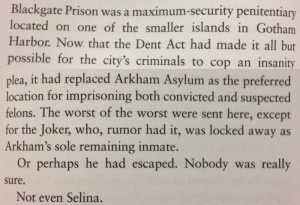 This is awesome, as Heath Ledger made the Joker role eternal.  The Joker is one of the best villains of all time and I’m glad he got a shout out, however I still hold out hope for an extra on the Dark Knight Rises blu-ray to include a scene referencing the Joker.  And one fan from Movie Moron posted a fan made sketch of what might have happened.