Lady GaGa Will Make Her Film Debut in ‘Machete Kills’!!! 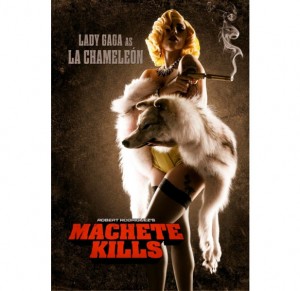 Director Robert Rodriguez took to his twitter account to announce that Lady Gaga will be making her film debut in his sequel to ‘Machete’ called ‘Machete Kills’. She will be playing La Chameleon.  Rodriguez tweeted, “I just finished working with @LadyGaga on @MacheteKills, she kicked SO MUCH ASS! Holy Smokes. Blown away”!  Then Lady GaGa tweeted, “Yes its true, I will be making my debut as an actress ln the amazing MACHETE KILLS BY @RODRIGUEZ IM SO EXCITED!!! AH! Filming was insane”.

I’m surprisingly not angry about this, because it’s a fucking ‘Machete’ sequel.  Much like Lindsay Lohan’s role in the first ‘Machete’, I think this will be kind of the the same thing.  GagGa joins Danny Trejo, Mel Gibson, Sofia Vergara, and Amber Heard, amongst others in the sequel.  This is going to be over-the-top and balls-to-the-wall fun.  Looking forward to this.