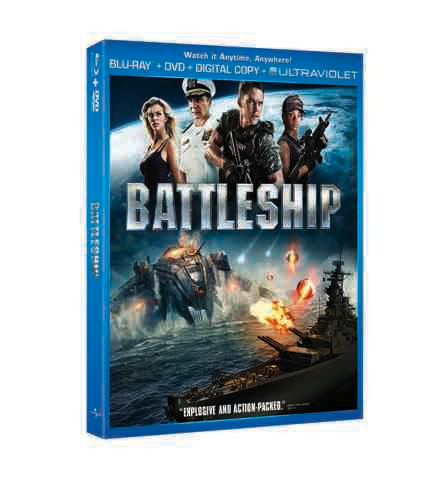 ‘Battleship’ has a bluray heading our way August 28th.  READ MY REVIEW HERE!  It looks like there are tons of features on this release, and I anticipate this bluray look flawless and sounding even better.  It looks like this bluray will come with the DVD, a Digital Copy, and the UltraViolet Copy.  I’m very happy that we are getting a choice in a Digital Copy and UltraViolet.  I’ll go Digital Copy 100% of the time, but I hope other studios take notice of this and start providing us with a choice. Looks like Amazon has the pre-order up for $24.99. Below are all the fixin’s you can expect with the release of”Battleship’ on Bluray.

An exhilarating campaign to save mankind unfolds on the high seas, in the skies and on land when Battleship – the entertaining, action-adventure made with unprecedented support of the US Navy – comes to Blu-ray™ Combo Pack, DVD and On Demand August 28th, 2012, from Universal Studios Home Entertainment. Also available through Digital Download.  Against all odds, a daring young naval officer and his heroic crew launch an all-out military showdown against a superior alien force in this enthralling, thrill-ride that will have viewers holding their breath through the final gripping face-off. Blu-ray ’s high-definition picture and perfect hi-def 5.1 surround sound provide the ultimate showcase to experience the film’s awe-inspiring special effects, non-stop action and ingenious weaponry. Almost two hours of exclusive bonus features including all-new featurettes, behind-the-scenes footage, filmmaker commentary and an exciting pre-visualization of an alternate ending make this a must-own disc for every movie fan.

The Blu-rayTM Combo Pack contains a Digital Copy of the film, compatible with iPhone®, iTunes®, iPad®, iPod®, iPod® touch, Android™ and online retailer partners as well as UltraViolet™.  UltraViolet™ is the revolutionary new way for consumers to collect movies and TV shows in the cloud to instantly stream and download to computers, tablets and smart-phones.  Consumers can now truly enjoy their movies anytime, anywhere on the platform of their choice.

Bonus Features Exclusive to the Blu-rayTM

Based on Hasbro’s: “Battleship”

Rating: PG-13 for intense sequences of violence, action and destruction, and for language

Rating: PG-13 for intense sequences of violence, action and destruction, and for language