Which Comic Book is Barry Sonnenfeld Bringing to the Big Screen??? 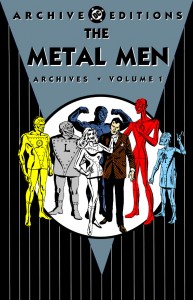 Barry Sonnenfeld, the director of the ‘Men in Black’ films, has just announced that he is taking on another comic book series.  He’s been a bit secret about it according to Vulture, but now the cat is out of the bag.  Can you take a guess?  It’s from DC Comics and first appeared in the 60’s in Showcase.  Give up?  Need more time?

Sonnenfeld is set for ‘The Metal Men’ series.  I would imagine, only a select few of you out there would know who The Metal Men are.  Their story revolves around an A.I. expert named William Magnus who creates sic cyborgs made from one distinct chemical element with powers that reflect their element.  There is Gold, Iron, Lead, Mercury, Platinum, and Tin.

Gold could stretch his form almost infinitely, Iron was super strong, Lead could block harmful radiation by morphing into thick shields, Mercury could melt and pass through small spaces before reforming and Platinum could stretch or flatten.  As for tin, well, I think he might just order pizza or something.

But, I can see this being a lot of fun and being pretty epic.  And just think of the action figures that will come of this.  Looking forward to it.  Your thoughts?