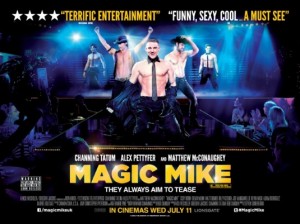 Are there naked slabs of man? Why yes, yes there are. But this is not all that Magic Mike has to offer. I have to admit, I dismissed this movie when I first saw the previews. I like looking at men – especially this cast of men – but filling two hours of film with this is likely to get old real fast. When I realized Steven Soderbergh was at the helm, I gave it a chance, and I’m glad I did. Magic Mike delivers on all the raunchiness hoped for out of a movie about male strippers, but there is more to it than Channing Tatum’s bare, rhythmic body.

The film begins as nightclub manager, Dallas (yes, his name is Dallas) – the ever-shirtless Matthew McConaughey – introduces the Xquisite male strippers and quickly cuts to the story of Mike (Channing Tatum). In a provocative opening, the audience is introduced to the life of an ambitious man who is still enjoying the party lifestyle. Though he dreams of producing custom furniture one day, Mike is busy trying to come up with the resources to support that dream. In one of his many jobs, Mike meets Adam (Alex Pettyfer) who is 19, down on his luck and could use some guidance.

Mike sympathizes with “The Kid” and decides to take him under his wing, worming Adam into the Xquisite club and from here the movie takes off. We meet a motley cast of strippers, Ken (Matthew Bomer), Tito (Adam Rodriguez), Tarzan (Kevin Nash), and Big Dick Richie (Frank Manganiello), all are great to look at but mainly serve to promote and support the idea of the stripping lifestyle throughout the movie. After one stripper goes down, Adam is pushed onto the stage to see if he can save the show, and Dallas, the Zen motivational coach for strippers, recognizes his talents and makes him a permanent team member. 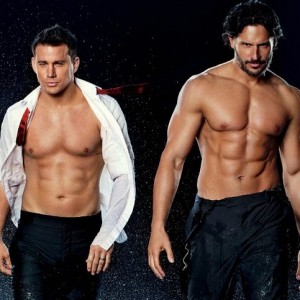 In his assumed mentoring role, Mike meets Adam’s sister Brooke (Cody Horn) who doesn’t buy into this idea of stripping as a profession and thinks that they are all men who actually still need to grow up (if you must know, according to Woozie, this is the “Dude” phase of male maturation). And she’s right. Mike, for all of his dreams, still is involved with fly-by-night relationships that will never amount to more than flings. He and the other strippers stay out all night drinking, using drugs, sleeping with random women, and getting involved in things that detract from his overall goals. For the first hour of the movie, you are right there with them for the fun and hijinks…you think, “This seems like a great life.”

Then reality creeps up like a slow hangover that turns into a throbbing headache. Mike cannot get any of his ideas off of the ground. He cannot trust his business partners. He cannot control Adam, and the more he gets to know Brooke, the more he questions his choices. When at the beginning everything seemed to go right, we come to a point where nothing seems to go right, and a drug-fueled party sequence feels more like purgatory than fun. Mike is a good guy – deep down he is decent, determined and genuine – but he has not yet figured out that it is going to take more than what he’s giving. And he realizes that Adam is about to go on the same journey he is, but where Adam is just at the beginning, Mike needs to hang up his thong and move on.

I like the performances in this movie – both the stripping and the acting. Of course Tatum brings it with the dancing, but for the first time I have witnessed, he doesn’t just seem to be an empty pretty boy who broods well. I know many Mikes in this world, and Tatum brings out the quiet self-doubt of someone who might look like he’s living the life but wants more. Pettyfer works as a young man who wreaks havoc in his life and others’ without ever realizing the destruction he’s causing. McConaughey uses the Texas, good ‘ole boy charm to lure you in, but in the end he is manipulative pimp. There could have been more nuances for the female characters. We see two versions – the party girls begging you to taste the apple and the women who want you to grow up already.

For what I originally expected to be fluff, Magic Mike surprised me. It was fun, funny, and still had a serious story to offer. The party, party set up did not need to last as long as it did and some character development was sacrificed while Soderbergh painted the scene, but it still works. If you’re a Soderbergh fan, male or female, go see the movie. If you want to see Channing Tatum recreate Step Up, be prepared for more than just his talented body. It’s not all fun and games, but I enjoyed the story and I definitely enjoyed the show.