New Line Cinema Will Release ‘Crazy U’ With Will Ferrell Starring?!?!? 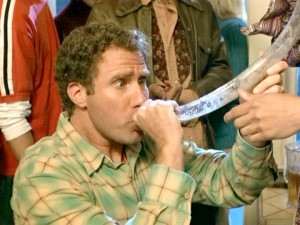 Andrew Ferguson’s book ‘Crazy U’ is getting optioned over at New Line Cinema with Will Ferrell possibly set to star.  The full title of the book is ‘Crazy U: One Dad’s Crash Course In Getting His Kid Into College’.  Will Ferrell and Adam McKay will produce the film according to Deadline.

The book is about “…one father’s adventures trying to brave the cutthroat competition to get his son accepted into the perfect college.  Obsessed with keeping his son from making that one wrong step that could dash the youth’s dreams, dad tries to get an audience with the most sought after and expensive private college consultant in the country, insinuates himself in helping his son past the SATs, and all the campus tours and stressful admissions interviews, all culminating in waiting for the fat envelope that will determine success or failure in getting into an elite school that will siphon off all dad’s savings.”

I have not read the book yet, but am anxious to start it.  This looks like a great comedy vehicle for Ferrell and I’m hoping they find a younger actor who can smash the comedy just like Ferrell.  I can see this being a great father/son comedy.  Just do it right.