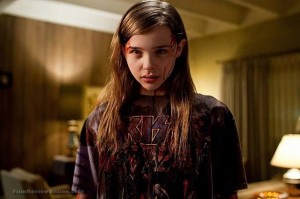 It looks like actress Chloe Moretz (Kick-Ass/Hugo) will be taking on the iconic role of ‘Carrie’ in the remake by Kim Pierce.  The decision was made after a group of actresses sat down for a table read and Chloe did so well, they formally offered her the role today.  ‘Carrie’ is a remake of the Brian De Palma version based on the 1974 Stephen King novel of the same name.

‘Carrie’ follows a female high school student who is raised by an insane religious fanatic and abusive mother.  Carrie is coming to terms with highly volatile telepathic powers as she finishes puberty.  She eventually uses her powers to kill her classmates at prom when they humiliate her in front of the entire school.  Sissy Spacek originally played ‘Carrie’.  Also, John Travolta starred in the original film too.  Spacek got an oscar nomination for her role in the film.

If negotiations go as planned, then Chloe will play Carrie.  If not, I’ve heard talks of Dakota Fanning being asked according to Deadline.  I think Chloe will do a fantastic job. She is one of my favorite actresses out there now and I’m sure she will conquer that role.  Can’t wait to see this and I look forward to more casting.