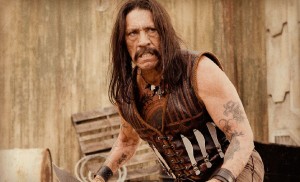 The film is called ‘Dead in Tombstone’ and it stars Anthony Michael Hall, Danny Trejo, and Mickey Rourke.  The film begins shooting next week and will be a big action adventure film directed by Roel Reine.   Roel has done a bunch of direct to video films including ‘Scorpion King 3’.  Universal Pictures have picked up this project and will distribute according to Deadline.

Trejo plays Guerrero Hernandez, leader of the Blackwater Gang of outlaws. But after freeing his half-brother, Red (Hall), from prison, Guerrero’s plan to loot the mining town of Edendale backfires spectacularly, when he is double crossed by his half-sibling. After making a deal with the Devil (Rourke), Guerrero comes back from the dead a year later to seek his revenge. The town, which has presciently been renamed Tombstone will soon have its dusty streets running knee-deep in a river of blood.

I’m just saying, this sounds amazing.  Machete, Rusty Griswold, and Whiplash in an action movie together sounds like a film I would see.  How about you?