*UPDATE* ‘The Colbert Report’ Suddenly Suspends Taping For A Week For Reasons Unknown!!! 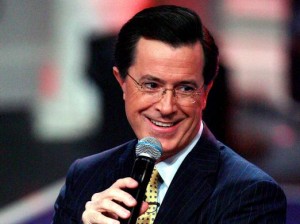 If you’re like me and you watch ‘The Daily Show’ and ‘The Colbert Report’ nightly, then yesterday you probably noticed a re-run of ‘The Colbert Report’.  Ticket holders for the show were notified and told that the show was suspended for the rest of the week due to “unforeseen circumstances”.  This is not something that happens hardly at all over at Comedy Central.  The two times this has happened with ‘The Daily Show’ was once when John Stewart’s baby was born, and the other time was the sudden death of a crew member.  And even then, the show went on the next day and was not suspended for a week.

According to multiple sources connected with the show and outlets including HuffPost, Stephen Colbert’s mother is seriously ill.  The show will remain suspended until he can return.  “Colbert was born the youngest of 11 children to mother Lorna, 91, and father James, who died in a plane accident in 1974 along with two of Colbert’s brothers.”

I sure do hope everything is alright over at the Colbert Report.  Even Stephen Colbert’s twitter feed which is usually always going, is unusually silent.

I hope it’s just that he is actually running for president and nothing bad has happened.  I will keep all of you updated as we get the news in.

2 thoughts on “*UPDATE* ‘The Colbert Report’ Suddenly Suspends Taping For A Week For Reasons Unknown!!!”