National Lampoon’s ‘Vacation’ To Be Rebooted!!! 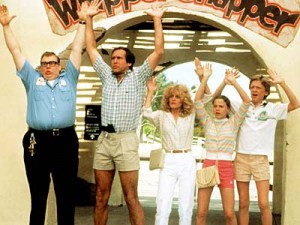 New Line has begun negotiations with John Francis Daley and Jonathan Goldstein to helm a ‘Vacation’ reboot.  Daley and Goldstein wrote the script back in 2009 and it plays both like a sequel and a reboot according to HWR.  This new adventure will center around Rusty Griswold (the son of the Chevy Chase character) who is now all grown up and has a family of his own.  They set out on their own family vacation and encounter some of the same disasters that we all have come to love.

John Francis Daly and Jonathan Goldstein were the minds behind the hit movie  ‘Horrible Bosses’ which made tons of money.  Daley was Sam Weir in Freaks and Geeks, and was also in Bones, and Kitchen Confidential. I think it’s about time we had another Vacation film.  I just hope that Cousin Eddy or his son is in the reboot and is as crazy as Randy Quaid made him.

I look forward to this sequel/reboot.  Your thoughts?

2 thoughts on “National Lampoon’s ‘Vacation’ To Be Rebooted!!!”