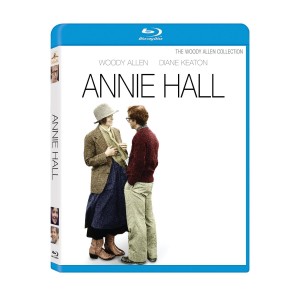 ‘Annie Hall’ is finally on blu-ray and that is good news folks.  But at least for me, it’s bittersweet good news.  Sadly, like most or all Woody Allen dvd’s or blu-rays, this does not have any extras besides the trailer.  Wouldn’t it be amazing if there was a commentary by Allen on ‘Annie Hall’?  But, with that said, this is the best the film has looked and should be in everyone’s collection.  ‘Annie Hall’ is a comedic masterpiece of love, loss, and wit.  One of the best films of all time.

A lot of people have said, ‘Annie Hall’ was the film that shot Woody Allen to stardom and was his “breakthrough” film.  The reason being, that the films of Woody Allen before ‘Annie Hall’ were mostly screwball silly comedies.  It wasn’t until ‘Annie Hall’ that there was a bit of drama and whole realism to his films.  The film centers on Alvy Singer (Allen), a successful, yet neurotic comedian in NYC who falls in love with a giddy, bubbly woman named Annie Hall (Diane Keaton).  The relationship starts out well enough, but then due to Alvy’s own insecurities and nervousness about everything in the universe, he destroys the relationship, pretty much forcing Annie to move across country to L.A. to live with Paul Simon.  Alvy realizes he has lost the love of his life and sets out to save his true love, even if it means he has to face every fear he has getting to L.A.  Woody Allen’s character Alvy talks to us through the camera throughout the whole movie about his adolescent years, his thought process in dating, and even calls out an annoying film critic in a movie line.  There is even a Disney like animated sequence in ‘Annie Hall’ describing how Alvy prefers the evil queen in Snow White rather than Snow White.  ‘Annie Hall’ is one of the greatest love stories of all time and one of the funnier films of the last 40 years.  It won Best Picture at the Oscars for a reason.  ‘Annie Hall’ is the real deal.  If you have not seen this movie, you must.  You will fall in love with ‘Annie Hall’ forever and never look back. 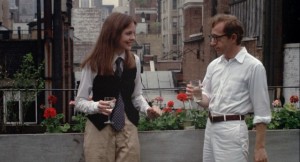 The video has that glorious 1080p transfer in 1.85:1 aspect ratio.  This film looks amazing on bluray.  I didn’t notice ghosting or halos, and everything seemed to look well lit in all the proper places.  There really wasn’t any digital noise nor specks on the print.  There is a hint of grain throughout the film, but that is due to the film’s time and place.  There wasn’t a whole lot of digital clean up on this one.  It has that great filmic quality to it.  The flesh tones look great and the colors and depth of beautiful NYC look stunning.  Well done on the video presentation.  The audio is has a DTS-HD mono 2.0 mix.  I’m happy the studio didn’t go in an give us some weird 5.1 mix for this film.  It didn’t need it.  This is a purely dialogue driven film and everything can be heard nicely on the front speakers.  The dialogue is crisp and clear without any cracks or hissing.  The score, and music in the film plays out nicely and the ambient noises flows evenly and never too loud over the main dialogue.  Great job on the audio.

While Woody Allen is notorious for not having any extras or commentaries on any of his movies, this bluray of ‘Annie Hall’ is one to pick up.  Definitely.  The audio and video are the best I have ever seen, and the film itself is one oft he best of all time.  It’s a winner of four Oscars including Best Picture.  Pick this up if under $20.00 which it is and always will be.