The Writers Guild Awards Nominations Are In!!! 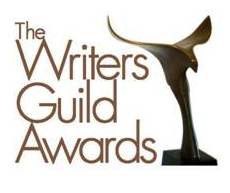 50/50, Written by Will Reiser; Summit Entertainment

The Descendants, Screenplay by Alexander Payne and Nat Faxon & Jim Rash; Based on the novel by Kaui Hart Hemming; Fox Searchlight

The Girl with the Dragon Tattoo, Screenplay by Steven Zaillian; Based on the novel by Stieg Larsson, originally published by Norstedts; Columbia Pictures

The Help, Screenplay by Tate Taylor; Based on the novel by Kathryn Stockett; DreamWorks Pictures

Hugo, Screenplay by John Logan; Based on the book The Invention of Hugo Cabret by Brian Selznick; Paramount Pictures

Moneyball, Screenplay by Steven Zaillian and Aaron Sorkin; Story by Stan Chervin; Based on the book by Michael Lewis; Columbia Pictures

If a Tree Falls: A Story of the Earth Liberation Front, Written by Marshall Curry and Matthew Hamachek; Oscilloscope Pictures

Nostalgia for the Light, Written by Patricio Guzmán; Icarus Films

Feature films eligible for a Writers Guild Award were exhibited theatrically for at least one week in Los Angeles during 2011 and were written under the WGA’s Minimum Basic Agreement (MBA) or under a bona fide collective bargaining agreement of the Australian Writers Guild, Writers Guild of Canada, Writers Guild of Great Britain, Irish Playwrights & Screenwriters Guild or the New Zealand Writers Guild. Theatrical screenplays produced under the jurisdiction of the WGA or an affiliate Guild must have been submitted for WGA awards consideration.

Documentaries eligible for a Writers Guild Award featured an onscreen writing credit and were exhibited theatrically in Los Angeles or New York for one week during 2011. Credited documentary writers were required to join the WGAW’s Nonfiction Writers Caucus or the WGAE’s Nonfiction Writers Caucus to be considered, but scripts need not have been written under WGA jurisdiction for consideration.