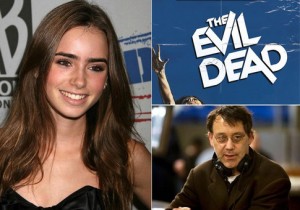 Here is the first casting news from the remake of The Evil Dead.  Yes, to recap, Sam Raimi, Bruce Campbell, and Rob Tapert will all be producing this remake.  But a new director, Fede Alvarez, is directing who really hasn’t done anything before, and they hired Diablo Cody (writer for Juno) to pen the script.  Now it seems they have cast their Ash.  And it seems to be a girl according to Bloody Disgusting.

Lily Collins, daughter of Phil Collins will play Ash, the role of Bruce Campbell in the Evil Dead trilogy.  Lily was in The Blind Side and Priest.  In this version, the story centers on five friends (David, Natalie, Eric, Olivia, and Mia) holed up at a remote cabin where they discover a Book of the Dead with a demonic force unleashed possessing each until only one is left to fight for survival. As we also exclusively reported, there is a drug subplot.  David is a mechanic and is engaged to Natalie. Mia is the friend who is heading to the cabin to detox; Olivia is her best friend/nurse. Eric, presumably, is the kid who unleashes the demons.  After a recent overdose, Mia struggles with her new-found sobriety. She begins acting insane, so it comes as no surprise that nobody believes her crazy claims of coyote dogs and trees attacking her!

And supposedly this is going to be a much darker tone of a film than the first and second films.  Who knows, but JESUS.  WTF happened here.  This is ALL wrong.  The role of Ash should have gone to Ryan Reynolds hands down.  I am so scared for this film to come out now.  I mean I have faith in all of this and in Sam and Bruce, but this is out of left field.