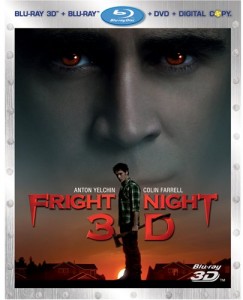 Now let me just say first off that I am a huge fan of the original 1985 film of the same name.  When I initially heard that they were remaking this horror classic, I was enthused yet a little apprehensive.  Then the casting came through and it was cast brilliantly.  Then the film opened and I believe I saw it opening weekend.  And I was pleasantly surprised by the film.  They did a decent job with most things.  However there were a few things I wish they did better.  But this 3D Bluray release from Dreamworks is pretty amazing.  If you are a fan of vampire horror, not the silly love vampire stories, but a fun and gory vampire horror thrill ride.  Then you will definitely need to take a bite out of this one.  (I know, that was too easy.)

Again this is a remake from a 1985 film of the same name.  It follows a teenage kid and his crazy friend, girlfriend, and mother where an evil vampire moves in next door to them and begins killing and turning everyone in the neighborhood into vampires.  It is up to the teenager to stop him.  Colin Farrell plays the head vampire and does so incredibly.  He pulls a very creepy evil demon very well on screen.  Anton Yelchin plays the main teenage character, Charley.  Anton played Chekov in the recent Star Trek film.  Toni Collette plays the kids mother, McLovin (Christopher Plasse) plays Evil Ed, Imogen Poots (28 Weeks Later) plays the girlfriend, and even Lisa Loeb gets a cameo in the film.  Not to mention an excellent cameo by Chris Sarandon (the vampire from the original film and Prince Humperdink).  There is quite a bit of fun to be had with this film.  There is even some cool vampire folklore put to good use here that rarely shows up in other films.  There is plenty of gore for those of you who love the blood and guts, and the comedy is spot on for the most part.  And there are quite a bit of tense moments that will put you on the edge of your seat where Charley is sneaking around the Vampires lair.  All in all, I had a bit of fun with this film.  I do prefer the original to this remake, however this remake does bring enough originality and fun to stand on its own. 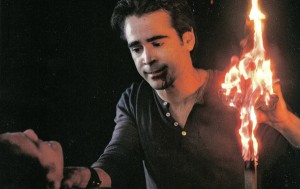 This release came with the the 3D bluray, 2D bluray, DVD, and digital copy.  The video is presented in 1080p with the AVC MPEG-4 encode at 1.78:1.  The blurays look great, but they are not flawless. With the 3D presentation, the image will always be darker with  3D.  This proved quite a bit of a problem with most of the film being at night because of the whole vampire scenario.  So in the 3D version, a lot of the night time scenes, I couldn’t tell what was going on.  The 3D took away from that, but with the 2D bluray it helps a lot.  For the most part everything is clear and crisp even in the darker scenes.  The blacks are inky and deep and their is really no noise.  The 3D FX are fun when they happen.  There is not a whole lot of times where stuff flies out  at the screen, but the few times when it does, it is AWESOME.  The vampires that burn to ember and the blood that splatters towards you was a lot of fun.  There was a problem with some of the textures here and there, more towards the first part of the film, but it seemed to fix itself.  Other than that, it was a decent video presentation.  The audio has a lossless DTS-HD 7.1 mix and sounds really good when it is used.  But sadly, it seems like the sound really takes its full on power only a couple of times throughout the film.  And for a horror film in 2011, I expect the sound to be fully on and in surround sound the whole time.  This is not a demo worthy track by any means, however when the sound is full, it gets the job done.

THE ULTIMATE WORD
The remake of Fright Night will not change the horror or vampire genre.  It is a fun and entertaining film.  It’s a decent remake and will be fun with friends in the dark during a storm.  The video and audio do well, but it’s not perfect, while the extras are less than what I would want.  If you are a fan of Fright Night and vampires, this is a must have.  If you are on the fence, then I would suggest getting this once on sale.  It’s worth picking up, but not a full price.
-Bryan Kluger