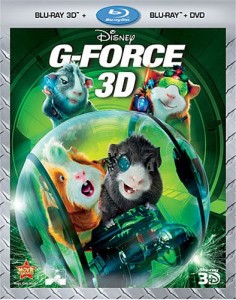 I don’t even know where to begin with ‘G-Force’.  I just can’t fathom that anyone thought that a bunch of guinea pigs that can talk and are actually super spies would get greenlit and made into a film.  Well that happened and kids love it.  I just don’t see anyone over the age of six enjoying this film, unless you have some sort of bizarre fetish and love for guinea pigs.  Other than the film itself being a complete disaster on all levels, the video and audio are pretty decent.  Especially the video presentation.  Talking rodents who are spies.  What’ll they think of next?

I think the only way I would have liked this film was that if the title was changed from ‘G-Force’ to ‘XXX-Force’ and that the replaced guinea pigs with mermaids.  ‘G-Force is packed with a stellar voice cast, but does that really appeal to anyone, ever?  I know i don’t see an animated film because of a certain actor is voicing the character, unless it is Bruce Campbell.  And even then it is iffy. But stars like Nic Cage, Tracy Morgan, Sam Rockwell, Jon Favreau, and Steve Buscemi are the voices of the film.  Add a ridiculous rodent spy plot and enough fart jokes that would bore Kevin Smith to death, and you have ‘G-Force’.  So basically a secret government organization has made a device to translate animals thoughts into speech complete with ethnic accents.  I laugh thinking about that still.  So this secret team known as G-Force is in danger of becoming no more due to funding and due to the G-Force team screwing up missions.  In order for the unit to not end and cease to be, the team must right the wrongs they have done.  Thus the main adventure of crap begins.  There are tons of twists and turns throughout the film paying homage to other spy films which you can pretty much predict everything.  Overall, if you are a kid under the age of six, you will enjoy the film.  There is enough stupid humor and action to keep that kid’s attention.  If you are older than six and you thoroughly enjoy the film, you must consult with your doctor and get some shots.  If you have a MST3K club like me, then this would make a great addition to your collection. 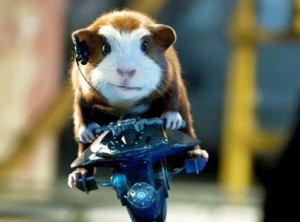 The video presentation is pretty much completely opposite from my take on the film content itself.  The video presentation is AWESOME.  Porbably one of the best 3D transfer re-releases from the Disney set.  The video is in 1080p with a 2.40:1 presentation.  This is definitely a demo worth disc.  If you want to show a friend what your new system can do video wise, you should put this movie in.  The detail is perfect.  The hair on the animals is distinct and amazing.  There is never a problem with any of the hair on the animals that seems to ghost or fuzzy.  There is a bit of depth to the video here and there especially in the exterior shots.  And  didn’t notice any blurring.  The 3D is simply fantastic.  If you are a fan of 3D FX popping out at you then this film has plenty of that.  Weapons and tools lunging towards you, parachuting animals dropping in, and some broken glass make this 3D release very unique and awesome to look at, even if the content is sub par.  The guinea pig ball chase is jaw droppingly awesome in the form of 3D.  Just wow.  Must be seen to be believed.  Much kudos to the 3D transfer on this.  The audio has a DTS-HD 5.1 mix and does what it needs to do for a kid’s action film.  THe action scenes are fun and loud and the dialogue is clear and crisp.  The ambient sounds are a plenty and the bass is not too forceful being a kids movie and all. 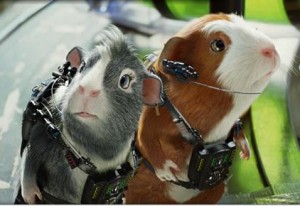 Of course this is a terrible movie on all levels content wise.  I just don’t see how movies like this get made and actually do somewhat decent.  It boggles my mind.  I will say if you are a 3D enthusiast, then you MUST pick up this release, because it is some of the best 3D I have seen at home.  Definitely demo worthy.  All but one of the extras I enjoyed and the film itself made me want to do something else.  Thank goodness the 3D was awesome which kept me interested.  But I’d save your money unless you have a kid under 6, are a 3D enthusiast, or have a MST3K club.