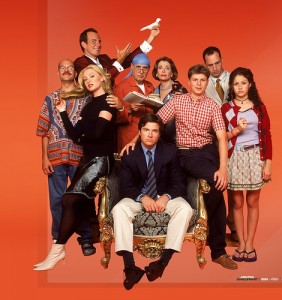 We reported a few weeks ago that Arrested Development would begin a new season after a few year hiatus.  Several networks including Netflix were trying to get the rights to hit comedy series.  Will it looks like Netflix has won that battle.  Surprising move, but I think it will do very very well on Netflix.  But over the past few months Netflix has lost almost 1 million subscribers due to their hefty price increase in return for doing absolutely nothing to improve the service.  I was one of those subscribers who cancelled, but fuck….now I have to reinstate my account.  I just hope Netflix distributes their original series in physical form.  If they don’t I will be super pissed.  Read the press release below.

In a landmark deal, all new episodes of the Emmy Award-winning comedy series “Arrested Development” will be coming exclusively to Netflix for its U.S. members to watch instantly, beginning in 2013.

For the first time in their histories, Twentieth Century Fox Television and Imagine Television will produce original first-run entertainment content for the world’s leading internet subscription service, bringing back the acclaimed series to production on all new episodes five years after its cancellation.

One of Time Magazine’s “100 Best TV Shows of All-TIME,” the tale of the formerly wealthy, deeply eccentric Bluth clan aired for three seasons, 2003-2006, on Fox and was honored with the Emmy award for Outstanding Comedy Series after its first season on the air.

“Arrested Development is one of the finest American comedies in TV history and its return through Netflix is a perfect example of how we are working closely with studios and networks to provide consumers with entertainment they love,” said Ted Sarandos, Netflix Chief Content Officer.

“It’s also a perfect example of how broad and successful our relationship has become with Fox as we work together with their film, television, international and digital divisions on several exciting initiatives,” he added.

Commented 20th Century Fox TV Chairmen Dana Walden and Gary Newman, “We build brands at this studio which are so distinctive that audiences still clamor for them years after they go off the air. ‘Arrested Development’ is a great example of that—it has stood the test of time. This innovative deal with Netflix represents a new business model that is extremely exciting and opens the door for a wide range of new collaborations.”

“We also pride ourselves on breaking the rules at this studio, and after bringing back two canceled series – ‘Family Guy’ and ‘Futurama’—to enormous success, we are bullish on the prospects for this brilliant series. We can’t wait to get back to work with Mitch, Ron and Brian on bringing the Bluths back to America’s living rooms,” they added.

Said Imagine Entertainment co-founders Ron Howard and Brian Grazer, “Of all the projects we’ve been involved with over the years, we probably get more questions about Mitch Hurtwitz’s brilliant‘Arrested Development’ than any other– everyone, ourselves included, seems to feel like the Bluths left the party a bit too soon. Bringing a series back from cancellation almost never happens, but then, ‘Arrested’ always was about as unconventional as they get, so it seems totally appropriate that this show that broke the mold is smashing it to pieces once again.”

Added Howard, “After a long hiatus, I’m dying to finally get back to the narrator’s microphone…’It’s Arrested…Development.’