Find Out What Christopher Nolan and Tomy Hardy Have to Say About Bane!!! 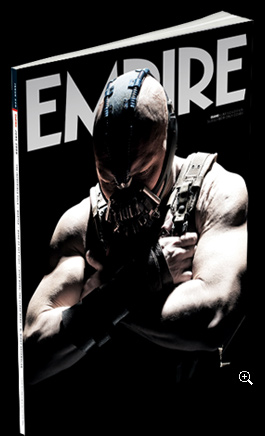 Over at UK’S Empire Magazine, Tom Hardy and Christopher Nolan speak about the villain Bane from the upcoming Batman: The Dark Knight Rises.  Hardy talks about playing Bane while Nolan talks about Hardy playing Bane.  Hardy was an excellent choice for this role.  From what little I’ve seen from the trailers and stills, this third Batman film will be epic.  Read the exchange below.

Tom Hardy
On Bane: “He’s brutal, brutal. He’s expedient delivery of brutality. And you know, he’s a big dude. He’s a big dude who’s incredibly clinical, in the fact that he has a result-based and orientated fighting style. The result is clear. “Do you know what I mean? It’s: f**k off and die. Quicker. Quicker. Everything is thought out way before. He’s hit you, he’s already hit somebody else. It’s not about fighting. It’s just about carnage with Bane. He’s a smashing machine. He’s a wrecking ball. The style is heavy-handed, heavy-footed, it’s nasty. Anything from small joint manipulation to crushing skulls, crushing rib cages, stamping on shins and knees and necks and collarbones and snapping heads off and tearing his fists through chests, ripping out spinal columns. It’s anything he can get away with. He is a terrorist in his mentality as well as brutal action. So he’s horrible. A really horrible piece of work.”

About filming the fight scenes: “It’s very overwhelming. When you’re training in a rehearsal room you go, ‘Okay, I have a contact with seven people. This guy I chin, this one I slip and I punch, this one I pick up and suplex, this guy I kick in the face, and this one, he stops a hammer with his head. And then I meet Batman.’ That’s all alright in a rehearsal room, but then you add 1,000 people that are all dressed the same as the seven you’re supposed to hit — ’cause they’re all police officers — and I don’t know where my police officers are. But the stuntmaster’s like, ‘Don’t worry. They will find you.’”

About Christian Bale’s Batman: “He looks really intimidating! There’s a three-year-old in me that’s going, ‘Oh my God that’s Batman! That’s Batman and he’s going to hit me! But I love Batman!’ Then I look in the mirror. And I hit him back. Twice as hard.”

Christopher Nolan
On Bane: “With Bane, we are looking to give Batman a physical challenge that he hasn’t had before,” says the film’s director, Christopher Nolan. “With our choice of villain and with our choice of story we’re testing Batman both physically as well as mentally. Also, in terms of finishing our story and increasing its scope, we were trying to craft an epic, so the physicality of the film became very important. Bane’s a very different kind of villain than Batman has faced before in our films. He’s a great sort of movie monster, but with an incredible brain, and that was a side of him that hadn’t been tapped before. Because the stories from the comics are very epic and very evocative — very much in the way that Bruce Wayne’s origin story is epic and evocative. We were looking to really parallel that with our choice of villain. So he is a worthy adversary. What Bane represents in the comics is the ultimate physical villain.”

About casting Tom Hardy in the role: “He has this incredible disjunct between the expressiveness of the voice and the stillness of the movement of his body. He’s found a way to play a character who is enormous and powerful with a sort of calm to it, but also is able to be incredibly fast at times. Unpredictable. He just has a raw threat to him that’s extraordinary. It’s a very powerful thing when you see it come together, beyond what I had ever imagined. That’s what you get from working with great actors.”