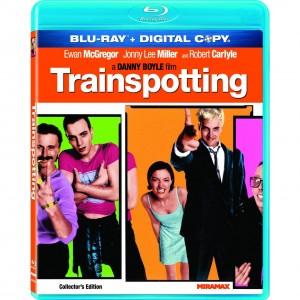 This is such a delight to have on blu-ray.  Danny Boyle’s first film sets the bar pretty high.  Of course Boyle would go on to direct ‘127 Hours’, ’28 Days Later’, and ‘Slumdog Millionaire’.  But Trainspotting was an instant cult classic and starred a wide variety of then at the time unknown stars, but today are A-list actors.  I have still not seen a film that has shown me the true distinction of agony and satisfaction as perfectly as this film did.  Seeing the constant struggle with drug addiction and the highs and lows of going through a drug addiction was quite entertaining and so tragic.  This dark comedy will take you through an insane psychadellic journey of devastation, pleasure, and the ultimate high.  That is ‘Trainspotting’ for you.

Based on the novel of the same name by Irvine Welsh, the film follows the lives of five close friends, Renton (Ewan McGregor), Sick Boy (Johnny Lee Miller), Spud (Ewen Bremner), Tommy (Kevin McKidd), and Begbie (Robert Carlyle), as they try to avoid the normal functions and life while they embark on a heroine and multi drug adventure.  The film follows Renton closer than the other characters and we see his struggle to kick his drug habit and his recovery or lack their of due to his idiot friends.  ‘Trainspotting’ does not follow the normal flow of film.  There is not a central story plot really, but rather several stories woven together that shows us the lives of these drug riddle characters and their own personal struggle with addiction.  The subject matter is not for the weak willed.  There is some shit that goes on in this film, but it is done in such a dark and twisted comedic matter that you it will make you laugh, but feel guilty about it.  Boyle definitely takes it to the next level with this visceral drug fueled cinema experience.  An instant modern classic.

The movie is presented in a 1080p AVC/MPEG-4 transfer in the 1.85:1 aspect ratio and it looks beautiful, yet real.  There are a few hints of dust here and there, but nothing too noticeable.  There is a very thin layer of grain in certain moments.  The colors of the movie are filmed in this dark and plain manner, so the colors, while they look much more vibrant and bright from past releases, don’t pop out at you.  But, needless to say, this video presentation is the best I have ever seen this film since the theatre release.  The audio is an English DTS-HD Master Audio 5.1 track along with optional English, English SDH, and Spanish subtitles.  The film’s killer soundtrack is fucking awesome in this audio mix.  And the dialogue is crystal clear and dynamite sounding.  Excellent audio presentation all around.  Great job.

This is one of the best drug fueled films ever made.  The acting is out of this world by everyone and the direction is top notch by Boyle.  There is violence, drugs, romance, comedy, and some real tragic shit rolled up in to this film.  The soundtrack kicks ass and the audio/video presentation is a lot better from its previous releases.  This is definitely worth getting and owning.  An instant classic.  Plus it has a jedi in it.